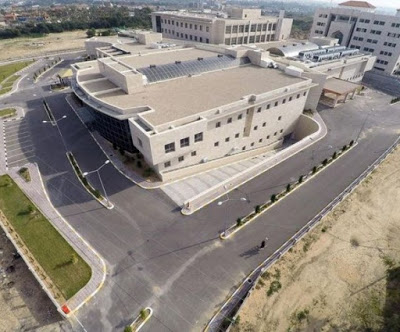 A new field hospital is being completed in northern Gaza near the Erez crossing. Called the American Hospital, it uses equipment from a private US NGO called Ships that used to be in Syria, and it will host international doctors.

From the start, Fatah and the Palestinian Authority have opposed the construction of a hospital whose entire  purpose is to help Palestinians. The PA, which has been withholding medicines and medical care from Gazans, insist that they should be the ones to approve such a move – and they never will.

Hamas, meanwhile, says that the hospital is part of the cease fire agreements with Israel.

As the hospital nears its official opening, the rhetoric from the Palestinian Authority and Fatah is getting even more crazed.

Here is what the Palestinian prime minister tweeted today:

PM Shtayyeh: The ongoing #Israeli isolation of the #Gaza Strip through the siege & the latest economic temptations, such as the American hospital project, is only an elimination of the #Palestinian national project & is one of the outcomes of the #dealofthecentury pic.twitter.com/WbMzt6XsMA

Minister of Health, Mai al-Kaila, vehemently criticized and rejected the establishment of a US field military hospital in the northern Gaza Strip under the sponsorship of Hamas and the Israeli occupation.

“We reject the establishment of this hospital, which falls within the framework of the “deal of the century,” said the minister.

She stressed that the ministry does not know who will run the hospital, which she slammed as an advanced US-Israeli military fortress inside the Gaza Strip. “The media blackout about the construction of this hospital raises many big questions about its real goals.”

She said that nothing justifies the establishment of the military field hospital, especially that all the population of the Gaza Strip enjoy a free health insurance entitling them to all of the Ministry’s services, including referrals to hospitals in the West Bank, Jerusalem and Egypt.

“Every year, the Ministry [of Health] sends medications and medical supplies worth 60 million shekels to the Gaza Strip. Therefore, there is no need for this US military hospital, where US military and not doctors will be working,” al-Kaila added.

She’s not the only one claiming the hospital is a front for a US military base that somehow Hamas allows in Gaza:


Fatah’s central committee member Zakaria al-Agha said that there are several questions on the ‘advanced security base being established on the Palestinian territories in the north of Gaza Strip dubbed as advanced field hospital’.

It will be interesting to see if NGOs will support this hospital or follow the PA’s lead in criticizing it.