An eyewitness writing in 1920 described the effect in Germany of the publication of the Protocols of the Elders of Zion:


In Berlin I attended several meetings which were entirely devoted to the Protocols. The speaker was usually a professor, a teacher, an editor, a lawyer or someone of that kind. The audience consisted of members of the educated class, civil servants, tradesmen, former officers, ladies, above all students …. Passions were whipped up to the boiling point. There, in front of one, in the flesh, was the cause of all ills – those who had made the war and brought about the defeat and engineered the revolution, those who had conjured up all our suffering …. I observed the students. A few hours earlier they had perhaps been exerting all their mental energy in a seminar under the guidance of a world-famous scholar. … Now young blood was boiling, eyes flashed, fists clenched, hoarse voices roared applause or vengeance. (W. K. Timmermann – Incitement in international criminal law)

Imagine the scene. Authority figures – often academics – riling up groups of people, often students, with lies that are meant to do only one thing: to incite the audience into hating Jews. And their methods worked – they seemed to gather “incontrovertible facts” that fed into the people’s need to find a scapegoat, to find a symbol that they can channel all their hate into.

This happens, today, too.

What are BDS meetings all about, anyway? They are meant to incite the audience with lies (in this case, the Protocols are replaced with heavily edited videos and fabricated news stories) in order to get them to hate Israel, and Zionist Jews.

Like the German antisemites of the 1920s, today’s Israel-bashers work hard to ensure that any information about their avowed enemies that is not wholly negative get censored, stopped, or drowned out with protests. The entire concept of accusations of “pinkwashing” and “artwashing” is meant to say that even when Israelis do something that aligns with modern liberal and moral values, it is really a nefarious plot to hide their unspeakable crimes. When Israeli Jews do something seemingly bad it is horrendous, when they do something good even that is bad. There is no room in their discourse for truth or honesty. And like then, there are enough idiots who are more than willing to fully adapt a simplistic theory of Jewish/Zionist evil to explain all the ills of the world (today including things like US police brutality, racism, colonialism, slavery, stealing organs, poisoning water, economic woes, and so forth.)

And, sometimes, the BDS meetings go full circle to attack Jews themselves, as this recent video of David Sheen blaming false and twisted interpretations of the Talmud and Jewish scholars for Israeli actions at a BDS meeting in Amsterdam: 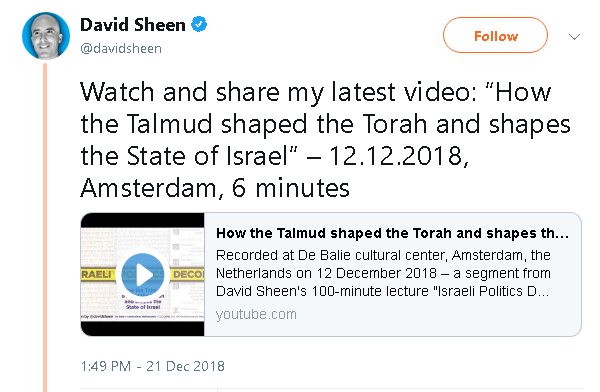 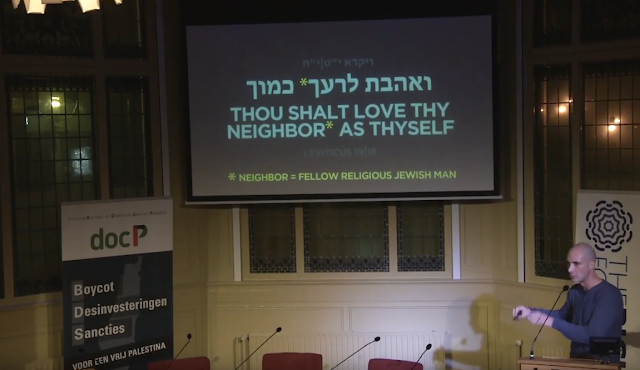 This lecture is exactly what the witness from 1920 was talking about.

Sheen makes explicit what BDS and Israel-haters have made implicit: the purpose of these meetings  is to rile people up and cause them to hate mainstream Jews who dare to support the existence of a Jewish state and sanctuary for Jews worldwide.

In case you actually watch this antisemitic video, Sheen quotes Maimonides to make it appear that he teaches Jews to ethnically cleanse gentiles. But the quotes are taken out of context, of course; Maimonides says that gentiles who live in Israel and accept the basic moral (Noachide) laws are to be treated with respect:

“Similarly, it appears to me that in regard to respect and honor and also, in regard to charity, a resident alien is to be treated as a Jew for behold, we are commanded to sustain them as Deuteronomy 14:21 states: ‘You may not eat any animal that has not been properly slaughtered… give it to the resident alien in your gates that he may eat it.’ …
However, our Sages commanded us to visit (all) gentiles (not just resident aliens) when ill, to bury their dead in addition to the Jewish dead, and support their poor in addition to the Jewish poor for the sake of peace. Behold, Psalms 145:9 states: ‘God is good to all and His mercies extend over all His works’ and Proverbs 3:17 states: ‘The Torah’s ways are pleasant ways and all its paths are peace.’

And Maimonides’ words about how to treat Gentiles come from the Talmud, where they are mentioned (with some variations)  no less than five times without any dispute: Tosefta Gittin 3:13-14, Jerusalem Talmud Gittin 5:9 47c, Jerusalem Talmud Demai 4:6 24a, Jerusalem Talmud Avodah Zara 1:3 39c and Babylonian Talmud, Gittin 61a.

Similarly, Jew-haters like Sheen like to say that when the Talmud says “Whoever saves a life, it is considered as if he saved an entire world” it is really referring only to Jewish lives, but the quote is given twice: once in context of Jews, and once in context of everyone including non-Jews (Jerusalem Talmud, Sanhedrin 4:1 22a).

Sheen’s claim that “neighbor” in Leviticus excludes females and the non-religious is too absurd to even discuss. It has no basis in reality, period.

More on this topic can be seen in the paper Loving-Kindness towards Gentiles according to the Early Jewish Sages by Joan Poulin.