Tunisia came under direct Nazi control for six months in 1942.  December 9 marks the 77th anniversary of the round-up of Tunisian Jewish males who were sent to labour camps.

In 1941, a census of Jews and their property was carried out. On November 9, 1942, the Nazis invaded the country. The Jewish population was then targeted for forced labor. They organized round ups, the largest being in Tunis on December 9, 1942.

Colonel S.S. Walter Rauff then went to the Great Synagogue of Tunis. He broke in  and arrested those who are there, as well Jews nearby. The arrests of Jews continued throughout the day, including around the Alliance Israelite Universelle school. The Administrative Committee (representative body of the Jewish community of Tunis) therefore decided to call to work Jews aged 18 to 27 years. 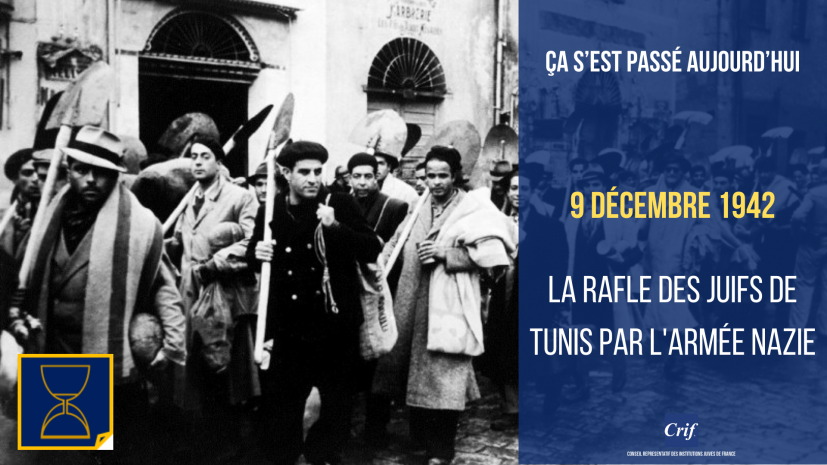 In the meantime, Colonel Walter Rauff decided to arrest 100 notable Jews to serve as hostages and be shot in case of disobedience. In the afternoon, a thousand Jews turned up before being sent to  labor camps throughout the country.

In total, nearly 5,000 Jews were sent to forced labor in 32 camps scattered throughout the country. is the Tunisian Jewish community financed these camps and provided for the needs of more than 5,000 men (between the ages of 15 and 45) who are fit to work.

From April 1943 begn the first deportations to camps in Europe. For lack of means, a single convoy,  was flown to the concentration camps and extermination in Europe.

SeventeenTunisian Jewish deportees did not return. The boxer Young Perez was arrested in France, deported to Auschwitz-Birkenau and died during the Death March in January 1945.