The attractions of Tapuah Junction to the stabbers and shooters of Palestinian Arab society proved irresistable this morning yet again to another would-be ‘resistance hero‘.

Just before 9 this morning (Thursday), a Palestinian Arab attacker was thwarted attempting to launch a stabbing attack at Tapuach Junction in Israel’s Samaria district. The outcome? He


was shot and killed by troops, police said. No Israelis were hurt in the attempted stabbing attack at a bus stop at the Tapuah Junction in the northern West Bank. Police spokesperson Luba Samri said the assailant, an 18-year-old resident of the West Bank city of Qalqilya, alighted a bus at the junction and began moving toward border guards there. After ignoring orders to stop, the man “continued to move toward them and at a certain point even pulled a knife out and attacked them,” Samri said in a statement. He was shot and killed. Security forces are regularly stationed at and near the junction, which has been a flashpoint of violence over the past year. Photos from the scene of the attack showed the assailant lying lifeless on a sidewalk as a soldier stood watch nearby… [“Palestinian pulls knife on troops in West Bank, shot and killed“, Times of Israel, December 8, 2016]

The Palestinian Arab media allegedly have their allegedly standard way of reporting such attacks, as Ma’an News Agency demonstrates today:


A Palestinian youth was killed by Israeli border police force… after he allegedly attempted to carry out a stabbing attack… Locals identified the slain Palestinian as Jihad Hussein Harb, 19, from Qalqiliya… While Israel alleges many of those were attempting to attack Israelis when they were shot, Palestinians and rights groups have disputed Israel’s version of events in a number of cases… [“Palestinian youth killed by Israeli forces after alleged attempted stabbing near Nablus“, Ma’an, December 8, 2016] 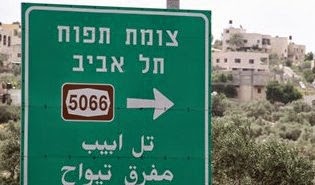 Ma’an’s Arabic edition (but not the English language version), in its news ticker – the story doesn’t yet have its own page – calls the thwarted killer a “martyr”

His portrait is already all over the Arabic social media (here for instance) as are photos of his dead body at the bus shelter (here for instance). Martyrdom posters and a celebratory funeral and mourning wake are surely not far behind.

The weaponization of their youth and children continue to be a core value of Palestinian Arab culture and society, with the formal and very public backing of its political echelon starting with its president and continuing all the way down to its schools and mosques.

The possibility of acheving peace in circumstances like these? Absolutely none.