The US officially opened up its embassy in Jerusalem on May 13.

Indonesia condemned the move, but even while protesters called to boycott the US,….

At a rally of about 80,000 people on Sunday, the Indonesian Ulema Council, a body of Muslim clerics, called for a boycott of US and Israeli products if Trump did not revoke his action.
Vice President Jusuf Kalla told reporters that Indonesia was trying to put pressure on Washington through the United Nations and it was not even practical to stop using American products.
“Do not be emotional… do we dare to boycott iPhones, stop using Google? Can (you) live without them?” he asked.
“(You) cannot live without them now. If you go out of the house now, you put (an iPhone) in your pocket,” he said.
Kalla said that even if people stopped watching US movies, other American goods such as specialized petroleum equipment were vital in oil-producing Indonesia, Southeast Asia’s biggest economy.

Indeed, the day after the actual embassy move, Indonesia held talks with the US to promote trade between the two countries!

In recent months, Indonesia was threatening to halt trade with Australia if it recognized Jerusalem as Israel’s capital.

Doom and gloom articles appeared in Australia’s press about how the loss of a proposed $11b trade deal would hurt Australia. 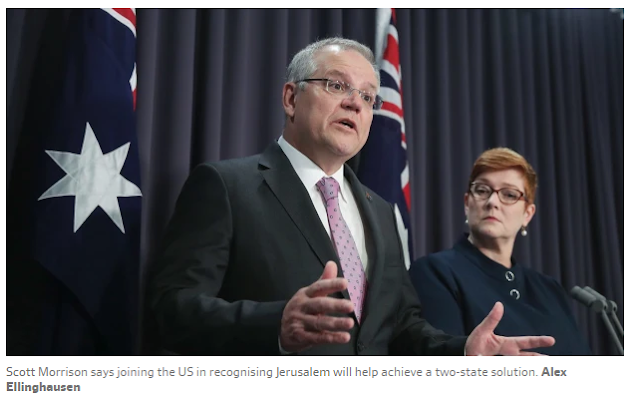 
The Morrison government is cautiously optimistic its decision regarding Australia’s Israeli embassy will not jeopardise the signing of the free trade agreement with Indonesia.
It is understood that cabinet on Tuesday agreed Australia would recognise Jerusalem as the capital of Israel but there will be no immediate move to shift the embassy from its current location in Tel Aviv.
Sources said that in reaching the final decision, the likelihood of Indonesia walking away from the FTA had been taken into account and, on balance, it was believed the deal would not be jeopardised by the decision.

Muslim countries are great at threats, but in the end, everyone looks out for their self-interests. Indonesia does not want to lose trade with Australia and it will make angry noises but keep on with business as usual.