There are less than 50 Jews still living in a compound in the Yemeni capital of Sana’a. It is not clear if the Yemenite members of the family were living in embattled Sana’a and how long ago they had left. Their settled appearance suggests that that their exit from Yemen had not taken place in the recent past.

The UAE seems to be using this happy reunion to show how ‘tolerant’ and humanitarian it is. A Twitter hashtag .was launched and tweeted by all the Emirates’ embassies. It may be that the UAE wants to be seen to be  competing with Dubai, where Jews practise openly in two community centres. 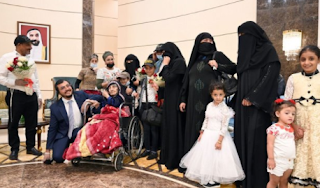 Although the UAE is clearly using the Yemenite family for PR purposes, relations between the Gulf states and Israel have progressed far enough for an Arab government to be proudly associating itself with Jews.

The Times of Israel reports:

“In a further sign of the United Arab Emirates’s effort to position itself as a regional center of religious tolerance, the country’s government organized the reunion last week of a Jewish Yemenite family that had been separated for 15 years.

According to a report by the state-owned Emirates News Agency, UAE authorities “facilitated the travel of family members from Yemen to the UAE” and also arranged for other family members living in London to join them. Among the family members were several young children and at least one elderly woman sitting in a wheelchair.”