The University of Manchester has made the classic mistake of how to deal with BDS – and it will regret this. 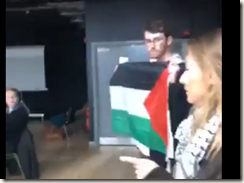 Last year, students crashed a UM board meeting, demanding that they divest from Caterpillar. The board members tried to be polite during the invasion and the self-righteous speech where the activists threaten that they will continue to harass the board members, “year after year after year, and it will get more intense.”

Apparently, the university decided to accede to some of the BDS demands to make them go away. Electronic Intifada reports that they have sold nearly $5 million of shares in Caterpillar and Booking.com.

But when activists bragged about their victory, the university released a statement saying that “The decisions taken on our specific equity holdings are made by our investment managers with the aim of delivering our overall investment goals” and had nothing to do with BDS. They are naively hoping that by addressing some of BDS concerns, they will make them go away and stop harassing UM leaders, while at the same time pretending that they are not willing to be bullied.

It never works. The Israel haters now smell blood, and this makes them redouble their efforts against the institutions that show the tiniest bit of wavering in their position.

In a statement on Monday activists from Apartheid off Campus, a new student network, said that “The divestment victory at Manchester, the largest university in Europe, is expected to be a watershed moment for the BDS movement on campuses in the UK.”

But activists said they would continue to target Manchester university for BDS campaigns.

According to Apartheid off Campus the university “still has many ties with Israel’s apartheid regime, including its exchange program with the Hebrew University of Jerusalem which sends students to study on occupied and stolen Palestinian land.”

(Hebrew University is on Mount Scopus, which was considered part of Israel since 1948, showing that the BDS movement is not at all about “occupation” and all about destroying Israel. )

As Asher Fredman documents in his recently released book on BDS, this was predictable – BDS concentrates on institutions that waver and that take them seriously and it gives up on those that ignore it.  Their demands are never ending on the unfortunate companies, universities and groups that try to accommodate them, and even the groups that capitulate completely to BDS demands are then told they must pay “reparations” for their “crimes.”

The University of Manchester thought they can make BDS go away. Instead, they have ensured that the harassment will increase “year after year after year.”