Last week, three Democratic members of Congress who hope to replace Rep. Eliot Engel as chair of the House Foreign Affairs Committee all said that they would condition aid to Israel to ensure that it doesn’t go towards “annexation.”

All three of the Democratic congressmen running to chair the powerful House Foreign Affairs Committee support either restricting or leveraging American aid to Israel as a form of opposing Prime Minister Benjamin Netanyahu’s plan to annex parts of the West Bank.

In separate statements to The Times of Israel this week, California Rep. Brad Sherman, Texas Rep. Joaquín Castro, and New York Rep. Gregory Meeks each indicated that US military aid should not be used on Israeli annexation moves.

This is all political posturing. As I have shown, all aid to Israel is audited and none of it is spent in the territories – it is all earmarked for specific projects.

To even imply that some of the US aid to Israel is being diverted for purposes other than what is intended is slanderous and anti-Israel, no matter how much these members of Congress or J-Street pretend that they support Israel.

But American political leaders are interested in sending lots of aid to Israel’s northern neighbor, Lebanon. That country is known to be thoroughly corrupt and it is known to be literally controlled by a terror group, Hezbollah.

The international aid conference held Sunday and chaired by France’s President Emmanuel Macron said that “Assistance should be timely, sufficient and consistent with the needs of the Lebanese people,”  adding that help must be “directly delivered to the Lebanese population, with utmost efficiency and transparency”.

But not a word about Hezbollah.

We’ve seen how Hamas has stolen aid meant for Gazans. We know that Iran and Hezbollah are cash strapped and will want a piece of the billions that could flow into Lebanon to rebuild. the time to address these issues is now, not after an aid mechanism is already set up.

The Israeli think tank Alma has documented 28 Hezbollah weapons cache or launch sites in Beirut. These sites are powder kegs that exist, today, right next to schools and apartments. what good is rebuilding Beirut when it has more highly explosive materials right in the middle of the city? 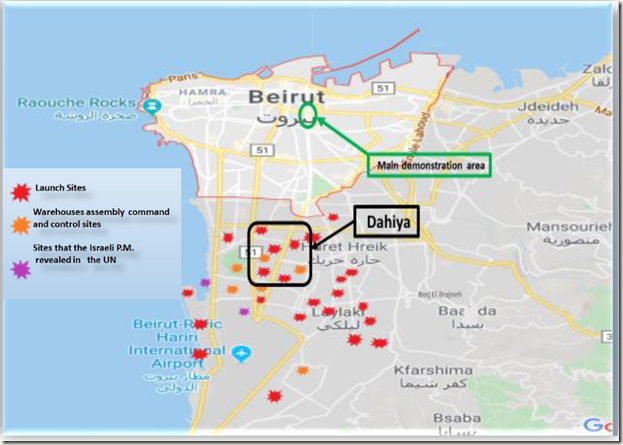 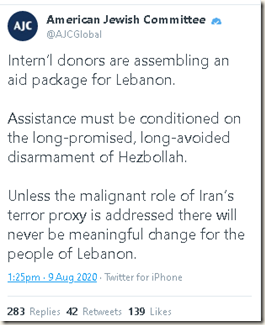 on should be conditioned on adherence to UN resolutions to disarm Hezbollah, but it took that tweet down without explanation.)

The world should send medical equipment, shelters, blankets, doctors and other aid to the people of Beirut. But when it comes to cash, strict controls must be put in place because the Lebanese people know better than anyone how corrupt their leaders are and how tempting it is for them to steal the funds meant to help. And they know how Hezbollah has hijacked their country.

Why wouldn’t every Western and Sunni Arab state insist on strict conditions for aid?

And why are we not hearing from these candidates for the House Foreign Affairs Committee on whether they insist that aid to Lebanon should have the oversight that aid to Israel already has?