First the Saturday people, now the Sunday people are being wiped out from the Arab world, writes Edy Cohen in the Algemeiner, charting the anti-Jewish pogorms of the 20th century. (It must be said that Jews suffered pogroms before the colonial era, and pogroms such as the Farhud may be attributed to Nazi influence. ) (With thanks: Lily, David)

A look at developments in the Middle East over the past decades gives the clear impression that the region is becoming “cleansed” of minorities, especially the Christians who have inhabited it for millennia.

The process is reminiscent of what happened to the Jews of the Arab countries, who had to flee their homes amid pogroms and persecutions they suffered throughout the 20th century, especially after the establishment of the State of Israel and its victories over its Arab enemies.

It was in Morocco, where several thousand Jews have remained, that the first massacre of Jews in the 20th century occurred — in Fez, on April 17, 1912, after Sultan Mulai Abd al-Hafid signed a treaty that turned Morocco into a French protectorate. For the people of the country, this handing of the reins of authority to a Christian ruler was an act of betrayal. Unable to attack French people, the Arab mob opted to attack Jews and their properties.  Fifty-one Jews were murdered, and many homes were looted.

On August 3 1934, a Jewish tailor in the Algerian town of Constantine cursed Muslims and insulted Islam while drunk. The result: pogroms against the local Jews that killed 25 and wounded 38.

Why do persecuted Christians rarely make the headlines? asks Lyn Julius in theArticle.com:

These are trying times to be a religious minority in the Middle East, or along the fault line separating Muslim and Christian populations in Africa and the Far East. And things are getting worse. The Open Doors organisation estimates that 245 million Christians are at risk of violence and persecution, compared to 15 million in 2018. Last year, North Korea was called out for its mistreatment of Christians – today Yemen, Somalia, Eritrea, Iran, Pakistan, Afghanistan, Libya, Sudan, China and (northern) Nigeria have joined its ranks. 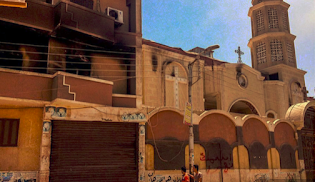 A church in the Middle East

Easter is a favourite time for Islamist jihadist groups to attack Christians. A pattern emerges of brutal anti-Christian violence: the Easter Sunday massacre by Boko Haram in 2012, the Peshawar church massacre in 2013, the massacre of Pakistani Christians in a Lahore park in 2016 by the Taliban.

The media don’t bother to join the dots. And while the 2019 Christchurch massacre of 51 Muslims by a far-right Australian hogged the headlines for days, the Sri Lanka massacres of over 200 Christians gleaned a fraction of the media attention.

Some Christians get none at all. Everyone has heard of the persecuted Muslim Rohingya, but, in the north of Myanmar, in the state of Kachin, Christians are being persecuted by the Buddhist majority. As soon as the atrocities happen, a veil of silence descends, especially if the perpetrators are Muslim. Who can forget Hillary Clinton and Barack Obama’s tweets condemning the massacre of ‘Easter worshippers’? Please, don’t mention the Christians.