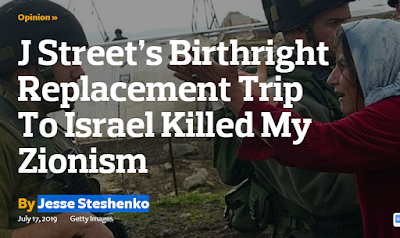 Last week The Forward, quite predictably,  published an op-ed by Jesse Steshenko where he claimed that the J-Street trip to Israel caused him to stop being a Zionist.

As I noted when the New York Times quoted him making that same claim, Steshenko had called Israel an “apartheid state” already in 2016, also saying that Israel had been occupying “Palestinian territory” for over 60 years – meaning that all of Israel is “occupied territory.”While he claims in this article that he was a left-wing Zionist in the mold of Meretz, it is quite impossible to be a Zionist and then say that all of Israel is an illegal entity.

The Forward, of course, didn’t bother to fact check Steshenko.

But as odd as it is to have someone claim to be a Zionist while saying that Israel is an illegal apartheid state, one of the commenters to his article is perhaps even odder.

This Sheldon Ranz is saying that he is a “Democratic Zionist” of Social Democrats USA, part of the “Palestinian-led” BDS movement.

Ranz is saying that Zionists can be proud BDS members!

No such possibility exists on the BDS Movement website. But indeed the Social Democrats USA claim to be Zionist while supporting BDS which is explicitly anti-Zionist.

Leftist Jews have a remarkable capability for willful blindness.