When  Jordan Salama’s mother was growing up in Iraq, the warning signs of impending doom for this most enduring of Jewish communities accumulated during her childhood. Are the warning signs appearing in the US? Jews must learn from the past ands take action, he argues in this important piece in the New York Times (with thanks: Dan, Janet) : 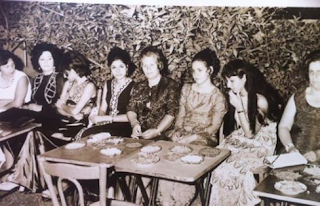 She doesn’t like to talk about Iraq much, but my grandmother Fortunée and my aunt Cynthia do.

Some of the most memorable moments of my childhood were spent in Long Island living rooms, sitting beside them as they told me, in a spellbinding mix of English and Arabic, stories of life in a country that ultimately rejected them after such a long and rich history of coexistence.

They shared tales of my great-great-great-grandfather, a trader who famously owned a caravan of more than 1,000 camels and traveled the Silk Road from Baghdad to Aleppo and Isfahan and beyond; of my great-grandfather, who built Iraq’s first cinema and movie studio; of the family house, with courtyard gardens so luscious they attracted wedding parties from all over the city.

In the summertime the children flew kites and slept peacefully on the cool roof. Jews were jurists and government officials; one was even the first minister of finance. They lived side-by-side with Christians and Muslims; they were business partners, neighbors, close friends who supported one another.

But these stories were always set up as the beginning of the end. Sprinkled throughout paradise were the warning signs, each worse than the next, until there was no choice but to leave. In the 1930s it was mainly political rhetoric; then in June 1941 it was the “Farhud,” a pogrom that killed nearly 200 Jews and injured hundreds more.

By the 1950s more than three-quarters of Iraq’s Jews had fled the country; just over a decade later, around the time my mother was born, the few remaining Jews saw their assets frozen and their passports revoked. My mother remembers when they imprisoned her father along with other Jews, remembers her mother going every day to the jail where he was being held, remembers the emptiness the family felt the morning after her cousins escaped over the border to Iran. When she was 3 years old, in January 1969, nine Jews were hanged in the main city square.

By 1972, my mother’s family was among some of the last to leave, bound for the United States. Today, the number of Jews remaining in Iraq is reported to be in the single digits.

This is the story my mother remembers, the story she has always feared would repeat itself. That no matter how comfortable we as Jews may feel today, it only takes a small group of people (and a large group of people to sit idly by) to turn everything on its head.

I remember watching with her in our living room as Donald Trump assumed the presidency in 2017. It was on her mind. As he approached the podium for his oath she asked me, with tears welling in her eyes, “Are we going to have to leave?”

At that point I didn’t think the answer was yes; I’m not sure I do now, either. But with each incident that has followed, family conversations have become more frequently wrapped up in those kinds of questions. First there was “Jews will not replace us” in Charlottesville, Va. Then the attack in Pittsburgh, on a synagogue that looked an awful lot like ours. Then San Diego, Jersey City and other smaller but significant incidents in between.

Jewish students’ experiences on college campuses are becoming. This fall, swastikas were drawn in a school in our district, and in another one nearby. And in December, there were several anti-Semitic attacks in a little over a week in New York — arguably the Jewish capital of this country — ending with the Hanukkah stabbings in Monsey.

From Baghdad to Queens: An Iraqi community remembers

From Exile to Exodus: the story of the Jews of Iraq (film)