Five days after their marriage, Benjamin Kweskin and his wife travelled to Kurdistan to spend a year in the country. One of the heroines of the now extinct Jewish community was the 16th century Asenath Barzani, the first female rabbi.  So impressive was she that Benjamin and his wife have named their daughter Asenath. Charming story in NRT English: 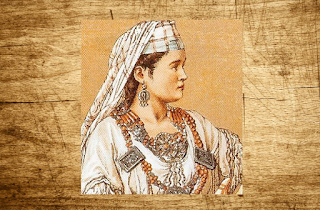 With great respect to the legion of Jewish women named Sarah, Rebecca, Rachel, and Leah, we traveled down a road far less traveled and ultimately opted for a lesser known woman of valor.

Most people believe the first female rabbi to be the esteemed Regina Jones, given smicha (ordination) in 1935 Germany. While R’ Jones was technically the first female (Reform) rabbi to be given such a title, there were at least a few other women before her that were acting rabbis such as the so-called “Maiden of Ludmir” Hannah Verbermacher, and Lily Montagu. In fact, someone preceded all of these woman—by centuries.

(BK: the surname Barzani references the specific region where they lived—Barzan—which lies a couple of hours north of the modern-day capital of Iraqi Kurdistan, Erbil. It also connotes the name of the Barzani tribe).

Others contend that Rabbi Samuel was from Mosul while others still maintain that he was from Amedi (Amediya), a picturesque town populated on top of a plateau surrounded by beautiful valleys and streams formerly populated by a sizable Jewish population through the mid-1800s. There were at least two synagogues in Amediya—one in the city itself and one in the valley below.

Asenath Barzani’s narrative begins with the patriarchal sentiment that Rabbi Samuel did not have any sons “because of his sins” and Asenath was merely his smartest, most capable daughter. He taught Asenath how to read and study Torah, Talmud, Mishna, and Kabbalah, “I grew upon the knees of sages, pleasing my late father greatly with my wisdom, he taught me nothing but the holy work of studying the Torah day and night,” she recalled in one of her remaining letters.
Eventually her knowledge became well-known throughout the wider Middle East. When it was time for her to marry, her father chose his brightest pupil, Rabbi Jacob ben Abraham Mizrahi. Radical for perhaps any time period, Rabbi Samuel stipulated in the ketubah (marriage contract) that they would not be betrothed unless his daughter would focus her time as a Torah/Talmud scholar as opposed to typical domestic work.

After Asenath’s father passed away and while her husband was away serving the needs of Kurdistan’s other remote Jewish communities she effectively became the religious leader of Amediya and the surrounding villages, and was acting Rosh Yeshiva (head of the religious school). She was also given the honorific title Tanna’it which references the early Tanna scholars who taught Mishna; however in at least one correspondence with a certain Rabbi Pinhas Hariri, he referred to her as rabbi (teacher), “My rabbi and teacher, we are always willing to serve you with pure faith.”

It is also said that while Rabbi Jacob was away, the Tanna’it wrote several petitionary letters to the Jewish community of Baghdad and elsewhere, asking for financial and religious assistance for her impoverished community. These letters were not only informative but lyrical, stylized, even poetic.

Said to be prolific in Kabbalah in particular, Asenath was perhaps most known for surrounding legends and folktales involving her. One recalls her yelling holy words to fend off an attacker, while the most famous, “Flock of Angels,” recalls that during one Rosh Hodesh (new month) she saved a burning synagogue in Amediya while using Kabbalistic incantations. Indeed, it is said that the community was so grateful to her for saving the synagogue that they renamed it after her. It may be the first time a synagogue was named after a woman.
Asenath’s influence was so powerful that century’s later, Jewish women in Iraqi Kurdistan continued to teach and lead their communities in different capacities. While unconfirmed, some Kurdish locals contend that her grave still exists today in the middle of the town.

Of course, while my wife and I do not literally expect our daughter to use Kabbalist chants to stop burning buildings, and do not necessarily need her to become a rabbi, we did seek to impart the values of this strong, unique proto-feminist woman, the first female ‘rabbi’ in Jewish history. Our expectations remain high nonetheless.