Antisemitism spread through the left like a tsunami through city streets. It may have entered via radical minority groups on the fringes, but as it hit the shore, there were no defences in place. Nothing to stop anti-Jewish sentiment moving from constituency to constituency. For decades, the mainstream has flirted with anti-Zionist activism. They have justified racist boycotts and supported the demonisation of the ‘Zionist’. They stood silently, as people wearing keffiyehs, turned every meeting into one that spread lies about Israeli actions.

Even staunch opponents of antisemitism will begin each sentence with a statement suggesting they ‘don’t support the Israeli government’. Sending an unspoken message that implies those demonising Israel are right. That Israel is indeed guilty of all it stands accused of. The mainstream allowed for the image of Israel as pariah to spread – so when antisemitism hit – there was no way to stem the tide. Anybody who stood up to shout down antisemitism, was accused of defending the indefensible.

The ‘it is just to stop criticism of Israel’ excuse has been given some level of legitimacy by major political players across the spectrum. Does this sound like ‘conflation’? Of mixing up antisemitism and Israel? Yes? Good, because it was meant to.  Anybody today who suggests the two issues are entirely separate understands *NOTHING* about antisemitism at all. Which is at the heart of the entire problem.

Antisemitism is embedded in the roots of anti-Zionist activism. Hitler wrote that Jews promote Zionism only because they ‘want a refuge for convicted rascals and a high school for future rogues’. Early opponents of Zionist activity frequently relied on anti-Jewish hate with tragic and devastating consequences. Those seeking support to oppose Zionism, found fertile ground in the sewers of global antisemitism. And the best part about antisemites? You can say whatever you like about the Jews and it will be believed.

Anti-Israel activity is a pyramid of lies. That is not to say that the Israeli state doesn’t overstep or make mistakes. It simply means what it says – most of what Israel stands accused of – is entirely false. And this trend is not new, it has been drip-feeding for as long as Zionism has been active. Sometimes, during conflicts such as 2014, the drip turns into a flood, but even during relatively quiet moments, the tide continued to rise. Another article in the Guardian, another documentary on the BBC, a few more viral videos – or a singer attacked for performing in Israel. The daily news feed that paints Israel as some type of pariah state was spread throughout the mainstream. Like spreading kindling in the dry forest.

From the street corner to Westminster

Take ‘Inminds‘ or the ‘Palestine Return Centre’. Inminds is an Islamist group fronted by a rabid antisemite, who publicly uses hashtags such as #jewnitedstates. Inminds are regularly on the streets of the UK, spreading lies about Israel. The PRC are little better, often gifted rooms at Parliament to hold their meetings. At one, I heard lies spread about Jewish money buying MPs votes. At another, I heard the Jews blamed for the Holocaust. The largest of the UK’s anti-Israel movements is the Palestine Solidarity Campaign. It was shown to be a cesspit of antisemitism. The PSC frequently share articles based on lies and distortion. Every anti-Israel group is guilty of spreading lies and all these groups receive political support.

And campus? How many times have I reported on vile lies about Israel being spread to students on campus? Lies dressed up as academia, whether in Exeter or Cork. There is no attempt to tell the truth. Images are placed on a screen, and then a story is told and the audience simply laps it all up. Israel as Apartheid, Israel as racist, Israel committing Genocide, Israel committing ethnic cleansing. Lie after lie, year after year, until the image of Israel in the mainstream no longer resembles the reality of the Israel that exists.

The normalisation of the lie

Wherever the Palestinian flag has been raised in the UK, lies have accompanied it. It is astonishing that ‘Israeli Apartheid week’ is even a thing on campus. A celebration of demonisation and lies that infects the minds of students. But why feign surprise? A Professor of History can openly state it is sometimes important not to tell the truth and nobody even blinks. Ilan Pappe as ‘liar‘ is paid to teach our students.

These lies became so normalised, very few can even recognise where the lines are anymore. Where boycotting Israel is opposed it is primarily because it ‘singles out’ Israel for punishment. Once more providing a tacit acknowledgement that the underlying accusations are true. In this fashion even staunch supporters of Israel have become tainted. BDS should be opposed because it:

Yet the ‘singled-out’ argument is the one most often heard. Why? Because the mainstream has been pumped so full of lies about Israel, it cannot distinguish democracy from radical Islamic terrorism.

From mainstream press to the politician

How many times has the Guardian misled its readers about Israel? The BBC? Each media outlet in turn has for decades promoted absurd distortions.

In the 1980s the PLO were seen as extremists. Then Hamas were the extremists and the PLO the moderates. Then the PLO were transformed into the victims, with the extremists, Israel & Hamas, battling it out. Today some take the next step, portraying Hamas as the victims of extremist Israel. This shift in vision has been thoroughly promoted in western media through an entire pyramid of lies. Everyone to some degree is tainted, some just further along the spectrum than others. Today, when someone speaks the truth about Israel, they sound like right-wing fruitcakes.

This is not to attack Wes Streeting but to use him as an example. Wes is considered a friend of Israel. This is Wes at a meeting in Parliament, sitting in front of the distorted ‘map’ that tells 1000 racist lies: 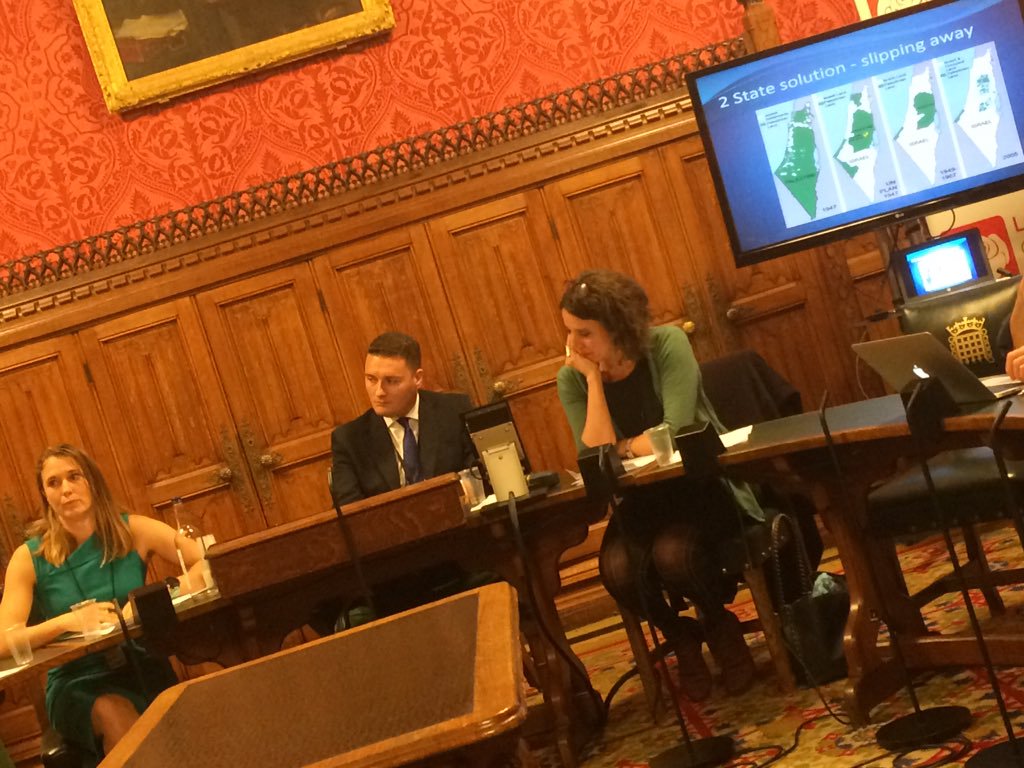 Wes would never sit in front of a map of the UK that had areas marked for ‘black people’ and the rest marked as ‘British land’. He would find the image racist, repugnant and instantly call it out. But so far have these lies become normalised in the mainstream, that Streeting, a friend of Israel, can sit in the same room as a map that does exactly that to the Jews. The people who organised the meeting – ‘Labour Friends of Palestine’ – yet another group who spread lies to all those who will listen.

The mainstream for decades has been flirting with the lies. Israel ‘might be’ an Apartheid state, ‘could be’ worthy of boycott and is ‘possibly’ committing Genocide. Incorrect terms like ‘illegal occupation’ are thrown about like confetti. The distortions promoted by the ‘red-green’ alliance became embedded in society. This created an environment of ‘Israel as global Jew’ where all the classic antisemitic slurs thrown traditionally at Jewish people, are now directed towards the Jewish state.

What should have been blatantly unelectable was no longer visibly offensive. Corbyn’s election in the UK and the recent victories of those like Ilhan Omar in the States are just symptoms of a moral compass that has lost all bearing. David Hirsh wrote recently about the union of hard-left antisemitism and misogyny, that form ‘hateful unions which are worse than the sum of their already frightening parts‘. Anyone who has trouble understanding Hirsh’s statement, should check out the Twitter feeds of both Rachel Riley and Tracy Ann Oberman. Two Jewish women, who by bravely standing up against racism became targets of this brutal union. The attacks against them are as vile as they are relentless.

When these ideologies surface in the political mainstream it is natural for Jews and their allies to stand up against them. A cross-party union of political opposition should have been simple, but it wasn’t. By having permitted this demonisation of Israel to spread unchecked, the mainstream had rendered itself defenceless against the antisemitic tide. What is antisemitism? What is Zionism? If Israel is the pariah state, then being a Zionist – which includes over 90% of Jewish people – means you support Genocide, ethnic cleansing and every other false accusation thrown against Israel. Any Jew standing up to oppose the lies, is accused of defending the indefensible. After all, when a Jew protests even the most ludicrous of conspiracy tales, they are doing so simply to stop criticism of Israel. Nobody asks the most basic of questions – is the criticism justified in the first place? Like a rabid medieval lynch mob attacking the house at the bottom of the hill, Israel’s guilt is automatically assumed.

This distortion has fully embedded itself in the mainstream. That’s not the fault of Corbyn, it is the fault of everyone who has lied about Israel and created the landscape for Corbyn to arise in the first place.

This blog is unique, and I engage in deep undercover research into antisemitism and the lies people tell about Israel. The work is fully independent, and I have uncovered many key stories on antisemitism on this site. I was recently named as one of the J100 (‘top 100 people positively influencing Jewish life’) by The Algemeiner. If you can, please consider making a donation towards the ongoing research.

You can make PayPal donations using the donate button above. I have also just opened a Patreon page. If you can consider donating just a few pounds a month it would be a great way to help me to kick-start it.

The post Why the mainstream is to blame for the antisemitism crisis appeared first on The David Collier blog.