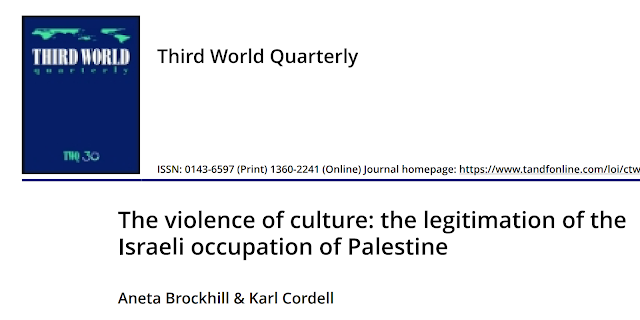 Last month, a paper was published in Third World Quarterly entitled “The violence of culture: the legitimation of the Israeli occupation of Palestine” by two British academics, Aneta Brockhill
and Karl Cordell. Here is the key point:


At the heart of the paper is an examination of five key cultural practices that are central to legitimising occupation in the Israeli consciousness. First, discursive delegitimisation of Palestinian identity by negating the existence of such identity and the denial of (historical) Palestinian presence in the land. Second, discursive deconstruction of the Palestinian right to the land by the employment of legal and religious claims to the occupied land. Third, the depiction of the Palestinians as ‘terrorists’. Fourth, the dehumanisation of Palestinians and, finally, the ‘naturalisation’ of the language and landscape of occupation. We argue that, collectively, these practices constitute acts of violence built into a long-established structure of cultural norms, narratives, normative beliefs and practices.

How did they figure out that this is what Israelis think? Did they do a survey? Did they interview random Israelis? Did they put out a call on a website for Israelis to help out their research?

No, of course not. Here is what they did:


40 in-depth semi-structured elite interviews were carried out with personnel of various non-governmental organisations (NGOs) and grassroots peace organisations in Israel and the West Bank, Israeli and Palestinian parties’ politicians, Palestinian and Israeli academics, all with direct knowledge of the Israel–Palestine conflict.

They interviewed people whose funding and jobs and careers are dependent on their demonizing Israelis. These interviews, they say,  determine “empirically” that Israelis are unfeeling monsters whose accurate narrative denying a historic Palestinian people is effectively a form of violence against Palestinians.

For example they interviewed Nurit Peled-Elhanan who repeated her lies about how Israeli textbooks are biased against Palestinians.

There are lots and lots of untruths in this paper. When the methodology is flawed, the entire paper is worthless.

But it is deemed good enough to be published in Third World Quarterly.

The social sciences truly allow anyone to prove anything they want if they use the right buzzwords.