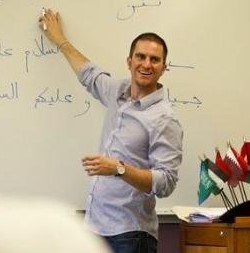 I’ve been browsing the Spring 2017 issue of the Swarthmore College Alumni Bulletin.  It’s clear that along with all the other socio-political stances that comprise the often bizarre and contradictory (women’s rights, Islamophilia) package deal of ideologies and attitudes of the Left, an anti-Israel default position is integral to that publication.

Regular readers of my blog may remember that not so very long ago I exposed the sympathetic publicity given by the Bulletin to visiting professor and alumnus (class of ’06) Sa’ed Atshan, who deplores Israel’s very existence.

The current Bulletin assures us that he has again


“completed his annual class trip with his Swarthmore students to Israel and Palestine.  He’ll continue to inspire future generations as as assistant professor of peace and conflict studies.”

Beneath the title “Speaking the Same Language: His immersion in Arabic became a lesson in empathy” Slocum tells us:


‘Brendan Work ’10 jokingly tells his students that they are learning “an enemy language.”

“They sometimes ask, ‘Why is there so much politics in Arabic class?’” says Work … “Well, when you’re learning Spanish or French, there just isn’t an international conflict with the U.S. that involves those speakers now.”

This is important context for his students, who must work through so much history and tension tied up in the study of the language through class discussions on the Israel-Palestine conflict, the Iraq War, and Syrian refugees. He seeks to offer them a point of view beyond bias or preconceived notions that he honed as a reporter.  [Emphasis added here and below]

“I knew I wanted to find employment at the intersection of Arabic and journalism,” says Work, who studied the language at the College as a comparative literature major. “I was looking for the big story, so I bought a one-way ticket into the occupied territory,” at a time when Palestine was submitting its statehood bid to the U.N.

Work secured a job at a small press agency in Bethlehem where he improved his language skills …before heading into the field as a reporter and photographer. As Work detailed the struggles of those in the conflict zone, he realized the Arab narrative was often told from a limited perspective.

For example, while covering a planned protest near the West Bank wall on the day of the statehood bid, a clash escalated and a Palestinian teen was struck by a tear-gas canister. (A Reuters photographer captured an image of Work aiding the boy moments after the violence.) Denied access to the nearest hospital because it was on the other side of the wall, the youth ultimately lost his eye. Later, out of concern, Work met with the teen’s parents…

“Their thinking was, ‘Resistance is our reality. In America, I thought, protests happened out of a sense – rather than a reality – of injustice.” 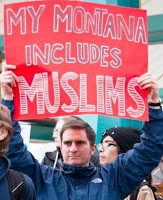 Work brought this empathy back to his Montana hometown, where an Arabic teaching position opened shortly after his return. In the classroom, he encourages students to see past stereotypes and to instead learn the cultures and customs of Arabic speakers…

Compassion, he teaches, is key…

“They [his students] enjoy the responsibility of being their family FAQ,” he says. “When their dad sees something about Iraq on the television, they love being in the room so they can say, ‘Here’s what I learned in Arabic today.’”

What Slocum neglects to tell the Bulletin‘s readers is that Brendan Work is a hardened anti-Israel activist who has, for example, contributed Israel-demonising articles to the Electronic Intifada

Transparency on the Bulletin‘s part is needed.

And so is an attempt at balance regarding Israel in its feature columns.