A number of years ago, Israel-haters in so-called “progressive” circles started an expression to demean Jews who subscribed to progressive principles, yet remained Zionist.

The expression was “Progressive Except for Palestine,” or PEP.

Mondoweiss has been using the phrase since at least 2009, and it appears to have been mainstreamed among the far-Left Israel haters in the years since.

I only heard of it when I saw a bunch of so-called “progressives” recommend an essay by disgraced antisemitic professor-turned-bus-driver Steven Salaita who argues that the popular expression is wrong, because it is literally impossible to be progressive in any area if one supports Israel:

Accepting a Zionist’s self-description as progressive or feminist (or socialist or anti-racist or whatever) renders Palestine subservient to arbitrary branding choices.  Exposing hypocrisy is satisfying, but less so if it elides the import of Palestinian liberation.  It’s better to scrutinize Israel as a source of moral privation rather than situating Palestine as a void that signifies an incomprehensible lapse of morality.

I agree that the hypocrisy of being called a progressive while having very regressive views on Israel should disqualify one from being considered progressive altogether – but from a somewhat different angle. I posted this on Twitter last night: 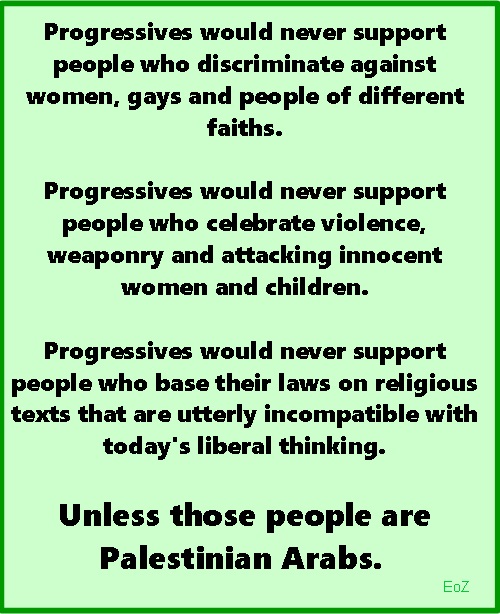 This is what the real definition of “Progressive Except for Palestine” is. Because once you hack your way past the lies and slander about Israel that is considered sacrosanct by much of the “progressive” Left, you see a state that embraces liberal values but does not embrace suicide, squared off against a truly regressive death cult that does not hold a single progressive position on anything. (I don’t use the phrase “death cult” lightly, but the overwhelming Palestinian support for the most reprehensible terror attacks shows that this characterization is accurate. And many in the so-called “progressive” community have embraced that same love of terrorists, especially by falsely claiming that murdering Jews is acceptable under international law.)

The only consistent progressives in the world are the dwindling number who support Israel. The others are “progressives except for Palestine,” or, as Salaita’s logic would have it, “regressives because of Palestine.”