Represented by liberals such as Samantha Power, the US ambassador to the UN,  the West seems only worried about the beleaguered Sunni Muslims of Aleppo, (although Prince Charles seems to have belatedly cottoned on to the dismal plight of Middle Eastern Christians).  Excellent piece by Daniel Greenfield in Front Page exposing the hypocrisy and lies over Aleppo: 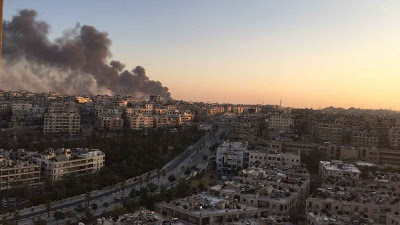 250, 000 Christians lived in Aleppo before the Sunni-Shiite Islamic civil war began. Today their numbers have fallen to 40, 000.

There were no worldwide protests over this ethnic cleansing of Christians from Aleppo as there are over the fall of the Sunni Islamic state whose Jihadis are euphemistically described as rebels. There were no photos of crying Christian children blanketing every media outlet. But today you can hardly open a newspaper without seeing a teary Sunni Muslim kid allegedly being evacuated from Aleppo.

Given a chance, the weeping Sunni Muslims did to their Christian neighbors in Aleppo what they had done to them back during the Aleppo Massacre a hundred years ago when they were upset that the decline of Islamic Sharia power led to Christians gaining some civil rights. The Jewish population of Aleppo, which had once made up 5% of the city, had already been wiped out in the 1947 Muslim riots.

The last Jewish family was evacuated from Aleppo to escape the Sunni Jihadis two years ago.

The destruction of the Jewish and Christian communities of Aleppo happened without a fraction of the hysterical tumult over the defeat of the Sunni Jihadis and their fellow Muslim religious dependents.

“Aleppo will join the ranks of those events in world history that define modern evil, that stain our conscience decades later,” Samantha Power declared at the United Nations.

Why doesn’t the ethnic cleansing of 210,000 Christians stain Power’s conscience? Or the church bombings by Islamists in Egypt, the stabbings of Jewish women in Israel and the Boko Haram genocide of Christians in Nigeria? True modern evil is the righteous conviction of liberals that only Muslim lives matter and that their Christian, Jewish and other non-Muslim victims somehow have it coming. (…)

The Jewish population of the Middle East now exists almost entirely in Israel, protected by guns wielded, as often as not, by the descendants of Jewish refugees from Islamic oppression in Syria, Egypt, Iraq and Iran. The Christian population, lacking an independent state of its own, continues to dwindle, dependent on the shaky goodwill of dictators like Mubarak or Assad who find them temporarily useful.