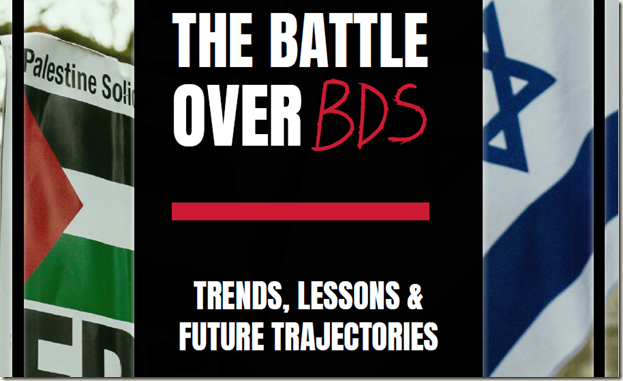 Asher Fredman just published a book (free online) where he goes into great detail about the BDS movement’s methods and what has worked against them.

I found one chapter to be particularly important. It showed that whenever BDS targets give the Israel-haters the tiniest amount of attention, this emboldens the BDSers to increase pressure on that company.

Meeting with them will make them increase their pressure. Partial concessions will increase it more. Even when they cave to BDS demands completely, the BDSers don’t leave them alone – they keep demanding more and more in terms of “reparations” for previous damage.

If a company shows the BDS movement that it is vulnerable to pressure by giving in to some BDS demands or engaging with BDS activists, this will increase the chances that the BDS campaign against the company will intensify.

CEMEX, the Mexican building materials company, is a good example of this BDS tactic. In 2015, CEMEX gave in to one BDS demand by selling its holdings in an Israeli quarry located in the West Bank. It has since refused to give in to other BDS demands and continues to operate three concrete mixing plants in Israeli-controlled industrial zones in the West Bank (in which, it should be noted, the majority of workers are Palestinian). …

However, despite Cemex’s declaration that it does not intend to give in to further BDS demands, the BDS movement, seeing that the company once showed itself vulnerable, continues to prioritize it as a target.

This principle applies not only to companies that surrender to BDS demands but even to those that merely attempt to engage BDS activists in serious dialogue. While it is understandable why companies may believe that engagement is a good policy and that the activists might be open to hearing the company’s point of view, in practice, such a policy only serves to intensify BDS campaigns. BDS activists interpret such attempts as a sign of pressure and an invitation to push harder. Companies that consistently ignore BDS pressure are more likely to see the campaign against them decrease, as the BDS movement chooses to look for softer targets.

The case of HSBC is a good example of this principle. Following the launch of a BDS campaign against the bank, HSBC attempted to engage British BDS groups in dialogue. This willingness was interpreted by BDS groups as a sign that the company was under pressure and could be pressed into accepting their demands. As described by the organization, “War on Want,” a key member of the British BDS campaign:

In summer 2017, we launched our campaign to pressure HSBC to cut all ties with companies selling weapons and security services to Israel’s repressive regime. Activists held pickets at HSBC branches in over 20 locations in the UK, and over 10,000 people emailed HSBC demanding divestment.

HSBC responded by asking for a meeting. In September 2017, and again in March 2018, we met with bank executives to reiterate that HSBC must immediately divest from companies selling arms to Israel.

We took one clear message away from our meetings with the bank’s executives: HSBC is nervous about the public response to its business complicity. And to us, that means one thing: time to increase the pressure on HSBC. (emphasis added [in book])

Likewise, the G4S security company discovered that each time it attempted to engage BDS groups involved in the campaign against it that began in 2010, or to respond to BDS accusations, the campaign not only intensified but broadened the scope of its demands.

This is demonstrated by the intensified focus on the tourism and travel companies, Airbnb, Booking.com, Expedia, and TripAdvisor. This focus is a result of Airbnb’s November 2018 decision to delist approximately 200 Jewish-owned properties in the West Bank (following a BDS campaign against the company). After extensive public and legal backlash, Airbnb reversed its decision in April 2019. However, although Airbnb reversed its decision, and although the company from the outset repeatedly denied that it supported BDS, and insisted that it remained committed to investment in Israel, major BDS groups “smelled blood.” The BDS movement, therefore, continues to focus on travel companies, with the hope that the initial success against Airbnb can be replicated.

If a company has shown that it can be pressured into giving in to BDS demands, then even after it has capitulated, and the BDS movement has declared victory, the BDS movement is still unwilling to end the campaign. As long as the BDS campaign has hope that a few more drops of “victory” can be squeezed out of the vulnerable company (and given that in most cases, extensive resources have already been invested in creating and disseminating the campaign), the campaign will continue.

For example, in October 2014, even as BDS celebrated as a “major success” SodaStream’s announcement that it would be closing down its production plant in the Mishor Adumim industrial area located in the West Bank, and moving its plant to Israel’s southern Negev region,88 the BNC’s spokesperson declared, “SodaStream will remain a focus of boycott campaigning.” While it is undeniable that the Negev is within the Green Line, the BDS used, as an excuse for its continued campaign, the land disputes between the state and the semi-nomadic Bedouin citizens of Israel living in the area. Given that SodaStream had shown itself vulnerable to BDS pressure,91 and given that extensive resources had already been invested in disseminating the anti-SodaStream campaign worldwide, the BNC had no interest in ending the campaign. This, despite the fact that the company moved entirely to within the lines of pre-1967 Israel.

In 2018, it was announced that SodaStream would be acquired by PepsiCo for 3.2 billion dollars. Following news of the sale, BDS leader Omar Barghouti affirmed that “SodaStream is still subject to boycott by the global, Palestinian-led BDS movement for Palestinian rights.”

Another tactic used by the BDS movement, which serves both as an excuse to continue BDS campaigns against vulnerable companies even after “victory,” and as a potential method for financial gain, is the demand for “reparations.” A company that fully complies with BDS demands implicitly recognizes the validity of the accusations made by the BDS movement against it. It will, therefore, likely become subject to BDS demands and legal actions seeking reparations.

For example, in September 2015, the BNC celebrated the French corporation Veolia’s full capitulation to the demands of the BDS movement. It declared “The sale of [Veolia’s] stake in the Jerusalem Light Rail project ends all of Veolia’s involvement in the Israeli market, including all projects that violate international law and the human rights of the Palestinian people.”93 BNC Coordinator Mahmoud Nawajaa stated that “Veolia’s withdrawal from Israel sets an example to all companies that are complicit in Israel’s human rights violations.”

However, Nawajaa added: “We call for legal action, by specialized organizations, against Veolia to compel it to pay reparations to the Palestinian communities adversely affected by its infringements of international law.”

A June 2017 announcement by the BNC shows that this demand for reparations was not just a one-time statement made in the exuberance of a BDS victory, but an ongoing effort. The announcement, regarding a BDS campaign in the Netherlands against an Israeli transport company, noted:

Veolia and Connexxion [a Veolia-owned transport company] have ended their complicity with Israel’s violations of Palestinian human rights, but have yet to pay reparations to the Palestinian communities they harmed, and campaigners are still demanding that they do so.

What would happen if a company is so scared that they actually pay “reparations?”  I imagine BDS would demand s public statement of contrition and apology plus  a demand that the company funds further BDS projects and gives a percentage of its profits to Palestinian “civil society” forever.

The only policy that corporations can and must take when BDS targets them is to state clearly that they will not give in to blackmail – and then ignore the haters forever more afterwards.