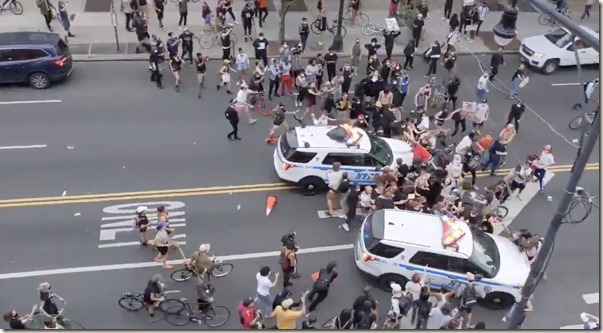 Social media is filled with images and videos of violence during the riots in response to George Floyds murder by Minneapolis cops – violence by the rioters and violence by the police. One egregious example of the latter is this video of New York City police cars purposefully ramming protesters who were throwing objects at them.

When the murder of Floyd occurred, many anti-Israel activists and organizations were quick to tie his death to Israel, either by explicitly saying that US cops were trained in Israel to kill protesters or by claiming that they were somehow influenced by Israeli techniques of violence against Palestinians.

The claims are of course absurd. While many police departments do send representatives to Israel to learn anti-riot techniques, they are the ones responsible for their police officer training and rules of engagement, and the cops themselves are responsible for their actions. Blaming Jews for the brutality of some US cops is simply a modern form of antisemitism.

However, there is an irony there. If the US police departments had actually gone through an extensive and formal training of riot control techniques as their Israeli counterparts have, there would be far fewer injuries of protesters today than we have been seeing.

Back in 2013, B’Tselem issued a report trying to damn the IDF’s riot control techniques. The report itself highlighted how much the IDF tries to minimize civilian injuries and death.

There are two main categories of controls that the IDF uses to minimize civilian injuries during violent riots.

The first one is to try to use weapons that cannot or are unlikely to injure or kill protesters – tear gas, foul smelling “skunk water,” stun grenades, foam bullets.

Far more important, however, are the instructions and training that go along with these weapons. IDF soldiers are given very specific rules as to when each kind of riot countermeasure can be used. Practically the entire B’Tselem report is accusing the IDF of not following its own rules – many of which the NGO only guess at based on secondary sources.

For example, here is part of the section in the report on stun grenades:

Stun grenades are a diversionary device whose explosion emits a bright light and a thunderous noise. The grenades are designed to cause fear and panic, distracting individuals and allowing security forces to gain control of crowds. According to Israel Police procedure, “This device should be used for handling disturbances of the peace which endanger the police force and/or public safety and which do not enable direct contact with the demonstrators without injury to police officers. This device is designed to achieve the dispersal of demonstrators and gaining control of them.” …When used according to the regulations, stun grenades should not cause bodily harm, nor do they have any side effects. However, under certain circumstances, the noise resulting from the explosion may damage the eardrum; therefore, users are instructed to wear hearing protective equipment. In addition, the grenades’ explosion mechanism generates an extremely hot flash of fire, and the very impact of a heavy metal object hurled at a person can result in bodily injury. Therefore, police safety instructions stipulate that the grenade must be aimed at a safe distance of 30 meters from the person throwing and 5 meters from the target, and in any case, the grenade must not be thrown into a crowd. Moreover, over the years, Israeli soldiers who have taken part in dispersing demonstrations have informed B’Tselem that they were instructed to roll stun grenades on the ground, not throw them at people.

The detailed, six page IDF response emphasizes the importance it places on proper training and documentation of when and where to use its non-lethal crowd control and dispersal tools, and only mentions the actual methods peripherally:

The rules and procedures for when to engage with live fire are clearly worded and also encompass the wide array of possible security situations IDF soldiers may find themselves in. These rules clearly establish for soldiers how to respond to life threatening situations as well as riots and other disruptions of public order. Additionally, the instructions regarding proper usage of crowd dispersal equipment are also clearly worded, organized and detailed. As updated instructions are passed from the headquarter-level to the field, they are adapted for the soldiers in the field, and “responses to specific situations” are included so as to ensure that the soldiers understand what is permitted with regards to the use of force and the use of the riot control measures.

It is important to note that the emphasis that the IDF places on the proper procedure for live-fire and proper usage of crowd dispersal equipment significantly reduces the potential for casualties. The IDF emphatically denies the claim that IDF soldiers racially discriminate when engaging in crowd dispersion in Judea and Samaria or in any other location. The decision regarding which specific crowd dispersal equipment to use is based purely on security and operational considerations, not on economic or any other type of consideration.

In order to deal with violent and illegal riots or other disruptions of public order, the IDF utilizes a selection of different equipment to disperse crowds as well as prevent causalities of any kind. The IDF invests a great deal in order to acquire as well as develop effective crowd dispersal equipment that will not harm the rioters; a good example being “Ha’Boesh” or the “skunk” canister. These measures are taken in order to avoid having to employ alternative measures.

Police and soldiers are human and sometimes, in the heat of being attacked, make mistakes. The way to minimize these mistakes is to engage in training and to have specific written rules and drills on how to deal with every situation. What we are seeing in the examples of police overreaction being shown in social media is that some cops simply are not adequately trained, and (certainly in the case of the police ramming mentioned earlier) they don’t even seem to be properly equipped with proper crowd control tools and methods to begin with.

If US police were trained by the IDF the way IDF soldiers are, there would be far fewer such incidents. The “Deadly Exchange” libel is the exact opposite of the truth – if the anti-Israel Left actually cared about protecting protesters, they would want US police to act the way their Israeli counterparts do and to increase training with the IDF, which unfortunately has a great deal of experience with violent riots.

Furthermore, as Haviv Rettig Gur notes, the training programs that do exist today emphasize how to avoid situations that can bring riots in the first place: “sharing best practices in community engagement, nonviolent policing, intelligence.” It is the polar opposite of what is being described by the Israel-haters.

Of course, the socialist Left agenda has nothing to do with avoiding riots or injuries and everything to do with vilifying the police and romanticizing the violent rioters  – just as they demonize the IDF and defend terrorism against Jews in Israel.