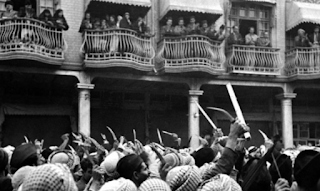 June 1st has been designated International Farhud Day – to recall the unprecedented massacre of Jews in Iraq in 1941 – 79 years ago.  Some 179  Jews died, 1,000 were injured and 900 homes and shops destroyed. The pogrom sounded the death knell of the Iraqi-Jewish community; other Farhuds led to the liquidation of other communities. This year, more writers are drawing attention  to this cataclysmic event:

Sami Sourani writes in the Shabbat Bulletin of the Spanish synagogue, Montreal that the death toll far exceeded the official figures:

The Farhud, the Pogrom of the Jews of Baghdad on Shavuot 1941, shattered the  Jewish community and put a question mark on  their future in Babylon/Iraq. The Jews lived there for 2,600 years and a thousand years before the Arab invasion. They supported the invaders, and for centuries there was  mutual respect and friendship. Now, everything was gone. They had loved ones to bury and a future to lament.

At the end of May 1941, the pro-German government of Iraq had failed and the leaders had fled,  leaving Baghdad without government. This happened on June 1, 1941, the first day of Shavuot. Traditionally, after the religious services, Jews went to the Tigris River to gaze at the water and wish for  a better life to all. Some were by the river bank and  others standing on the bridge. In that season, the current is strong and the water level high. The pro-German mob, who accused the Jews of celebrating the defeat of the government, swarmed on to the worshippers with clubs, hitting them on the head and throwing the bodies in the river. They were drowned and the strong current carried them to unknown destinations. Nobody knows how many died.

Then, the mob moved on to Jewish houses. A few days earlier,  they planned to identify Jewish houses by painting red marks on their walls. It was thus easy to break in and ransack  the homes and kill men, women and children. In the streets or on public transport Jews were massacred. From far away, one  could hear women screaming, “For Allah’s sake do not kill my baby, my child!”. The local police helped the mobs a great deal.

Despite this carnage, some non-Jewish neighbors  protected their Jewish friends who lived in the same quarter. The Kurds, in particular, were honest defenders. As the situation worsened, there was a rumor that the British ambassador in Baghdad had requested help from the British commander in Palestine. Two army divisions arrived. It was the British ambassador who told the generals that if they had arrived a day late, another thousand people would have been killed – a hint that the estimated casualties were about a thousand a day.

Those figures  by far exceed the official number of 180 to 200 Jews killed in total. Those low numbers were officially released by the government after the meeting of the Regent with the Jewish Community representatives. Those numbers did not include the families that disappeared or people thrown in the Tigris river. The Jewish community buried the victims in a huge mass grave in  the Jewish central cemetery. When this cemetery was demolished by the Iraqi Government in 1960, this grave was also destroyed. The Iraqi Government thus erased proof of this genocide.

Ron Jager writes that the Farhud was the start of the mass exodus of Jewish communities (with thanks: Imre):

A vast Jewish Diaspora underwent a process of communal annihilation prior to Israel’s establishment and continued during Israel’s formative years, yet we Israelis rarely talk about or commemorate these historic events. On the eve of the establishment of the State of Israel, at least 800,000 Jews lived in Arab countries. Today, this ancient Jewish Diaspora numbers only a few thousand at best. These numbers alone should give us pause: Emigration of more than 99 percent of the Jewish population in such a short time is unparalleled in modern Jewish history. Even the Jewish communities of Europe, which experienced the most extreme suffering of anti-Semitic violence, did not vanish entirely, or so abruptly. The story of the Jews from Arab lands is a saga that extends over hundreds of years and over a vast geographic region.

Rachel Wahba in The Times of Israel blames age-old anti- Jewish discrimination for the Farhud:

Five years ago, 74 years after the Farhud, “Violent Dispossession,” the United Nations dedicated June 1 International Farhud Day. The terror erupted in Baghdad on June 1, 1941, and lasted exactly forty-eight hours. My mother, Khatoun, was just sixteen, a young Baghdadi Jewish girl. In 1941 Iraq was home to one of the oldest Jewish communities in the world, with two thirds of the country’s Jews living in Baghdad. The Farhud broke out when Iraq’s pro-Nazi party was dismantled by the British. Anti-Zionist apologists for Islamic Jew hatred, continue to claim the Farhud was purely a European Nazi driven import. This flawed, dismissive explanation insults reality. The long history of dhimmi laws and pervasive cultural contempt for the offending infidel Jew, is the sad truth. My mother grew up like most Iraqi Jews, knowing her place, as a second-class citizen, without equal civil rights, in her own country. There is a name for this status in Islam, Dhimmi. A “protected minority” until the protection vanishes at different times.

Why do Jewish virtue-signallers ignore the F-word?