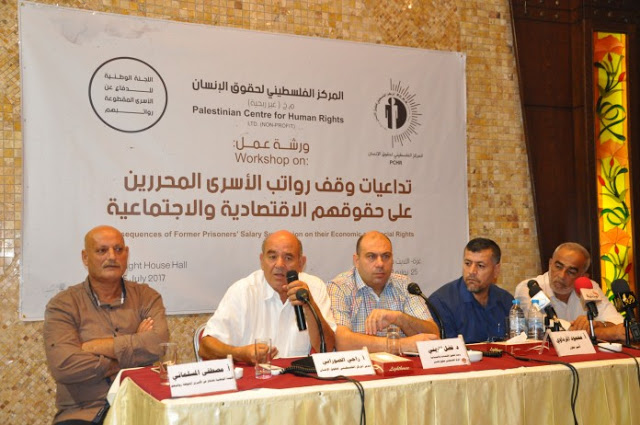 The conference centered on some 277 former prisoners in Gaza, all of them Hamas as far as I can tell, who lost their permanent salaries from the Palestinian Authority. But the arguments that PCHR is putting forth in defending them are the same arguments that they would use to defend paying the thousands of prisoners and former prisoners, including murderers, who take up a significant part of the PA budget.

The workshop was opened by Dr. Fadel Muzeini, a researcher at PCHR’s Economic and Social Rights Unit.  Muzeini emphasized that PCHR has paid special attention to prisoners and former prisoners over their years of work and always supported their just causes. He also stressed that the Palestinian Authority’s decision to suspend the salaries of former prisoners is unfair and in violation of former prisoners and their families’ right to a decent life.  He added the decision is unconstitutional and explicitly violates the Basic Law and Prisoners and Former Prisoners Law No. 19/2004 and its amendments, which guarantee former prisoners’ rights to be monthly paid a salary according to a specific system.

The director of a lavishly funded human rights NGO says that “international human rights law” demands that people who murder Jews must be paid a  lifetime salary for their efforts.

The Palestinian Basic Law indeed provides that terrorists should get rewarded:

And apparently there are other more detailed Palestinian laws guaranteeing their salaries as well.

However, PCHR is going further, asserting that the right for people who tried or succeeded in murdering Jews to be given salaries is protected under international law! Not only that, but this NGO says that not paying them is immoral.

Rewarding terrorists is moral. Not rewarding them is immoral. That is the position of perhaps the most prestigious Palestinian human rights NGO.

All of these funders and nations are indirectly supporting financial incentives for murdering Jews.

Out of all the egregious, immoral actions of “human rights” groups, this is the most shocking. Answers must be demanded from not only PCHR but also from every one of its funders. And the answers must not be of the “let’s sweep it under the rug” type where PCHR makes a half-hearted statement that gets eagerly swallowed by these governments and non-government funders so they can continue to throw money – often taxpayer money – to a “human rights” group that has just proven that it is the antithesis of human rights.

As long as you consider Jews to be human, that is.