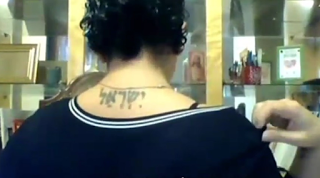 The story is from October:


The niece of a top official in the Palestinian Fatah party and a close confidant of the late leader Yasser Arafat says she loves the State of Israel so much, she had the word “Israel” in Hebrew tattooed across her shoulder blades.
Sandra Solomon, 38, was born a Muslim in Ramallah under a different name, but grew up in Saudi Arabia before moving to Canada where she converted to Christianity.
Solomon is the niece of Saher Habash, one of the founders of the Fatah party, a member of its Central Committee and a leader of the Second Intifada.
“I grew up in a home that hated the Jews, hailed Hitler and praised the Holocaust,” she told Channel 2 in an interview Wednesday.

Here’s her interview, subtitled in English:

Right after this was shown on TV, her family disowned her.