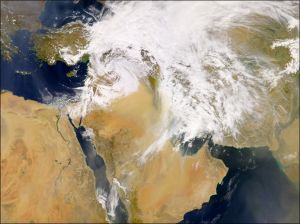 Baghdad, November 30 – Community elders throughout the Muslim Middle East voiced wistfulness today at the realization that present and future generations in their countries will never know the pleasure of kicking Jews out, since almost none remain anymore.
Once-thriving Jewish communities across the region suffered precipitous decline in the decades since the establishment of the State of Israel, as local Muslims, with government sanction, made Jewish life all but intolerable, and official policy led to the confiscation of Jewish-owned property and the exodus of hundreds of thousands of Jews from the lands that had been home to them for thousands of years. Now all but bereft of Jews to persecute and expel, Muslims in Iraq, Yemen, Egypt, Libya, Algeria, and elsewhere who remember what it was like to participate in pogroms, looting, or random anti-Jewish mayhem against their Hebraic neighbors expressed some regret that because of their thoroughness in conducting such activities, their children and grandchildren will never know the visceral pleasure of raping Jewish women and beating their husbands and fathers to a pulp for trying to prevent it.
“The people of Iran are fortunate,” opined Mustafa Massikr, 78, of Sanaa, Yemen. “They have thousands of Jews they can still dump on, and against whom they can take out whatever frustrations they might have. But here in Yemen we have maybe a few hundred, and they’re hardly worth the trouble. I wish I could give my descendants the same thrill and sense of vitality I felt when I helped my older brothers torch those Jewish shops in response to Israel’s declaration of statehood. Good times.”
In Egypt, where fewer than a dozen openly practicing Jews are known, older folks gave voice to similar sentiments. “It’s not the same, persecuting Copts,” observed Aiwil Qillemal, 80. “They’re just everyday dhimmi, not the very embodiment of every kind of evil against which any and all violent measures are not merely justified, but a sacred duty. I miss having Jews to kick around.” He noted that the handful of Jews remaining in the country have enjoyed official protection for many years so that the government can claim not to be antisemitic.
“Maybe for old times’ sake we can knock off one or two of them?” he suggested. “You know, so the children can experience it in an authentic, close-up way, not the fake opposition to Israel that so many so-called Muslim countries have maintained since 1973.”