They fear their beloved mythical Anglo-Saxon monocultural masterclass is threatened. The Nazis had similar values….

According to the racist opponents of multiculturalism, the Muslim agenda is that Australia must be a Muslim nation.

If you believe this, I can also sell you the Sydney Harbour Bridge….

Ironically, we may be better off as a Muslim nation. Christianity has never been less popular and Islam is the fastest growing religion in the world. It’s a religion of peace, love, family values and respect, and the only faith to give women equality in its holy book.” 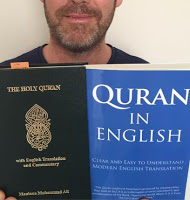 What a comedian, eh?

But one we are seeing all too frequently among the “anti-Zionist” crowd.

See what I mean?  (The Israel-basher quoted in the previous image happily poses with a book.)

Here’s a look at how Europe’s “cultural enrichers” respect women in France, with the “public space” closed to them in a shopping precinct in a district of Lyons, and how both Muslim-born and non-Muslim women are fighting back:

Here’s a look at Merkeland, where youths from Muslim hellholes are demonstrating how much they respect women in authority (by abusing and threatening them):

Here’s another look at “cultural enrichment” in the same country:

If those of us who were part of the elite spent more time in pubs in provincial England and provincial Wales we would have heard what I just said.

This is not about GDP, it is principally about the complete loss of control of the EU’s external border and what that implies for our country’s future.

I have had a kind of awakening. Brexit woke me up and reminded me I needed to pay much more attention to what the non-elite majority of voters were thinking.’

Under its wet wet wet liberal CEO Jonathan Greenblatt, the ADL seems bent on turning that organisation into a one-stop shop for the promotion of every leftist bandwagon that rolls by, and demonising as bigots anyone outspokenly critical of Islam.

As Jonathan Bronitsky has written, at the end of a brilliant essay here :

‘First, I hope this essay persuades the ADL, which is heavily invested in antibullying (e.g., “No Place For Hate” campaign), to consider that it itself has become a bully to conservatives who remain in its ranks. Shutting out right-leaning individuals through crowd intimidation and derision weakens coalitions, which are vital in advocacy work. This behavior also diminishes the organization’s values, which will turn stale and trite when left unchallenged.

Secondly, I want the ADL to revisit and clarify its mission. “The nation’s premier civil rights/human relations agency,” asserts that it “fights anti-Semitism and all forms of bigotry”; not just “all forms of bigotry,” but “anti-Semitism” and then “all forms of bigotry.” Yet as murderous anti-Semitism around the globe has surged in recent years, the ADL has dedicated itself more and more to matters of social justice in America (e.g., immigration, women’s reproductive health, economic “privilege”) that are already being pursued by a plethora of lobbying outlets and activist foundations. This wouldn’t be problematic—or rather, duplicitous—per se. But the ADL loudly and incessantly bemoans the fact that Jews are living in an increasingly dangerous world. “Thirty or forty years ago,” I heard over and over again at the National Leadership Summit, “I couldn’t have imagined that Jews would be getting shot dead in the streets of Europe.”

Well, resources are limited. Is combatting anti-Semitism a “priority” for the ADL? If so, then the organization should put its money where its mouth is. Alas, this outcome seems ever more unlikely as it seeks to enforce group conformity and advance political agendas that have nothing to do with defending the Jewish people.’

And as Jonathan S. Tobin wrote a few days ago:


‘In the month since the presidential election, many in the American Jews have been in mourning over Donald Trump’s victory. For all too many Jews and the organizations that purport to represent Jewish interests, partisan disappointment has led to a great deal of loose and highly irresponsible comparisons of our present situation to Weimar Germany and the rise of Hitler. It is in that context that a new report from the Community Security Service (CSS) about terrorist incidents and attacks on Jews and Israelis in the United States since 1967 is critical reading for those who wish to re-focus the Jewish community on real rather than imagined threats to its security.

The report, which was written by Yehudit Barsky, one of the top experts on radical hate groups in the country, provides a comprehensive analysis of the recent history of anti-Semitism in the United States. She paints a frightening picture of the rising toll of violence against Jews from two distinct sources: white supremacists and radical Islamists….

This serves as a reminder that for all of the talk about Islamophobia, both before and after the election, Jews and Jewish institutions remain the main targets of religious-based hate crimes in this country. This is a fact borne out by the FBI’s annual reports on hate crimes. The latest available report is from 2014 and that one, like every other issued since the outset of such compilations confirms this fact. In that year, 58.1 percent of all religious hate crimes in this country were directed at Jews. Only 16.3  percent were anti-Islamic….

Monitoring hotbeds of hate is key to stopping attacks, but, in the effort to avoid accusations of Islamophobia, efforts by law enforcement to keep tabs on radical mosques and other Islamist centers have been abandoned and wrongly branded as acts of prejudice. Without good intelligence, it’s only a matter of time before another major attack might be successful….’

And as Melanie Phillips has so well expressed matters (‘Mrs May’s False Note’):


‘Islamophobia does NOT come from the same wellspring of hatred as antisemitism.

Antisemitism is a true prejudice because the hatred and demonisation it promotes derive entirely from lies and a repudiation of rationality itself.

Islamophobia is a false allegation of prejudice which is deployed to silence rational criticism based on actual facts about attitudes and practices within the Islamic world.

The result of Mrs May’s lethally compromised even-handedness is to misunderstand, and thus minimise, antisemitic attitudes and behaviour while shutting down legitimate and necessary discussion of the threat from the Islamic world – even to demonise as “Islamophobic” anyone who draws attention to the extent and consequences of Muslim antisemitism.

The result was the ludicrous exclusion from Britain of the anti-jihadists Geller and Spencer in 2013. Whatever one may think of their style or choice of allies, to suggest that people who fight against antisemitism and the jihadi threat to the world pose a threat similar to that presented by the terrorist godfathers Abu Hamza and Abu Qatada is just grotesque.

… Yet last July the government allowed into the country two extremist preachers from Pakistan, Muhammad Naqib ur Rehman and Hassan Haseeb ur Rehman, for a seven-week preaching tour of mosques. Both are supporters of Mumtaz Qadri who in 2011 murdered Salman Taseer, a Pakistani politician who spoke out against that country’s blasphemy laws.…

To equate antisemitism with Islamophobia not only reveals a moral and intellectual muddle and a failure to understand what bigotry actually is. It also inescapably suggests a most alarming inability to grasp the full nature and extent of the Islamist threat to Britain and the free world.’

Meanwhile, Hizb ut-Tahrir, the extremist group banned in much of the Middle East but tolerated in Britain and Australia, has been making its view known, yet again, on the streets of London.

To say nothing of that German Christmas market in today’s headlines.