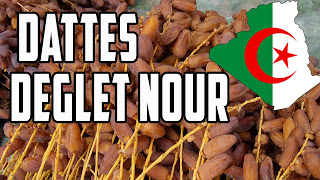 Apparently, Algeria has has problems exporting dates to Europe.

At the turn of the century Algeria exported some 10,000 tons of dates to Europe, mostly France.  But now they are complaining that Jewish importers in Marseilles are rejecting their date shipments, saying that they do not adhere to international standards, and according to this article they then blackmail them into reducing the prices since it is too expensive to send the dates back to Algeria.

I have no idea whether it is true, but they are blaming the Jews.

I found this relevant article in a website for fresh food exporters:

Algerian date exporters have started to conquer the Asian date market by exporting many varieties of the fruit.  The President of the Chamber of Commerce and Industry in Biskra, Abdelmadjid Khobzi, said that Algeria’s first time participating in the International agri-food trade show in Jakarta (Indonesia) last November “allowed the Indonesian, Malaysian and Indian consumers to discover different varieties of Algerian dates”.
The Indonesian government have apparently agreed to give the investors 3 hectares of land on which to build a date processing factory with “very encouraging” fiscal advantages.  Mr Khobzi says that “this project will allow us to access other Asian markets” and he denounces “foreign lobbies” that are blocking Algerian date exports to Europe.