Ahlem Mosteghanemi is a UNESCO Artist for Peace because, in their words, “of her commitment, through her writing, to causes such as social justice and the education of young people affected by armed conflicts. Mosteghanemi is widely regarded as one of the most read writers in the Arab world. Through her works, she provides unwavering support to intercultural dialogue, women’s rights and the fight against violence.”

Apparently she also believes that Jews control the banks by stealing money and lending it out.

Last week, she tweeted this: 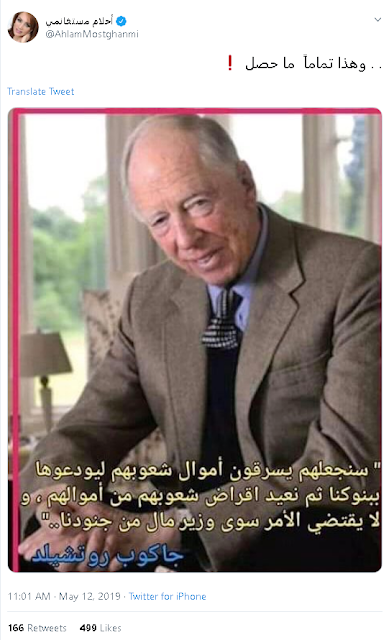 It is a photo of Jacob Rothschild with the caption, “We will have them steal the money of their people and deposit it in our banks and then loan that money back , it only takes a finance minister from our soldiers.” Her comment is “And that is exactly what happened!”

Apparently there is a banking scandal in Algeria, and Mosteghanemi  is using a fake quote from the person that antisemites love to pretend runs the world banking system to say that the Algerian bankers are taking a page from the evil Jews.

I bet she doesn’t see anything wrong at all about this.