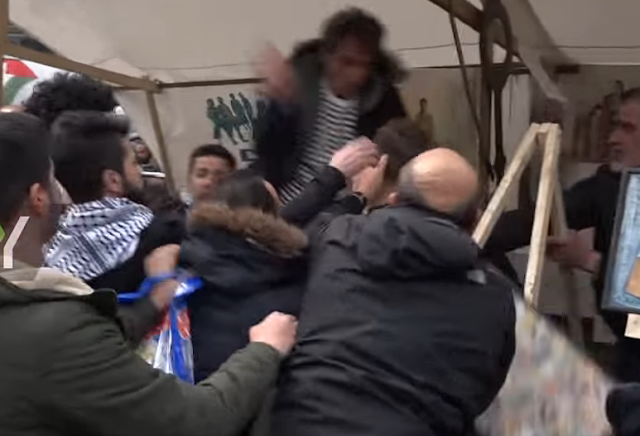 During the Q&A session of my Yom Haatzmaut talk (which I didn’t put on video,) someone asked me about BDS and whether its failure to hurt Israel economically was a miracle as well.

My answer was that the goal of BDS is not to boycott Israel. The goal is purely to demonize Israel, the make the world associate Israel with “apartheid” and “occupation” and to dissociate it from anything positive like Israel’s many accomplishments and its liberalism in the face of enemies who want to destroy her. In that sense, BDS has been very successful, especially on college campuses but also in the left wing of the Democratic Party, the British Labour party.

BDS wants to make the very idea of Israel, and indeed the very word “Israel,” toxic.

Which brings us to what happened in Berlin this week.

German Palestinians violently attacked the Israeli clarinetist Daniel Gurfinkel in Berlin in the first week of May, according to a YouTube video that surfaced on Thursday.

According to a report on by the German reporter Ulrich W. Sahm on the website of Audiator, “A dozen hateful Palestinians can be seen beating up Daniel Gurfinkel at an event on a large square.”

Gurfinkel said in a statement: “I walked through Hermann square and saw that there was a demonstration against Israel. I am a resident of the State of Israel. The attack began immediately when I began to support my country with a single word. I’ve been struck on the head and I’m in pain so far. I was in total shock. “

When a mob attacks someone for saying the word “Israel,” and the police are sort of blase about it, it shows how successful BDS is at demonization.

Already in 2009, police in a German city broke into an unoccupied apartment and removed Israeli flags from the window to appease a crowd of anti-Israel protesters who were angered by the sight of the flag and started throwing rocks. 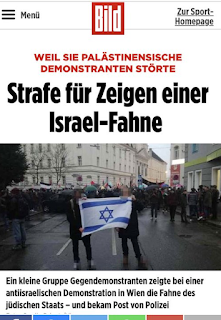 In 2015, also in Germany, police told Jewish fans of an Israeli player at a soccer game to remove the Israeli flag they were showing, due to fear of violence by Muslims.

In Austria this past December and again in March, students were actually fined by police for waving Israeli flags during anti-Israel demonstrations – because the very presence of an Israeli flag was considered a “provocation.” At the very same time the anti-Israel protesters were screaming “Death to Israel” freely.

Only this week, an American college student council rejected an application to form a pro-Israel group on campus, even though such a rejection has never happened before.

How soon will it be before college classrooms post “trigger warnings” before classes that happen to mention Israel, or put stickers on books that show Israel on the map, to avoid haters from going berserk?

The BDS movement wants the very word “Israel,” used in any way besides as a profanity, to be banned in public life.

The scary thing is that they are making inroads in doing exactly that, with a combination of threats of violence and claims that the very word is so upsetting to certain people that they must be protected from even hearing or reading it.

The vitriol is reserved only for Israel, and the only precedent that can be found for such a level of hate is historical Jew-hatred. It is no coincidence. The idea that one has more of a right to attack people saying the word “Israel” than the people have of saying that word is nothing less than the mainstreaming of antisemitism – and even the celebration of antisemitism.

This is a full frontal assault on free speech, happening in Western countries under our noses.