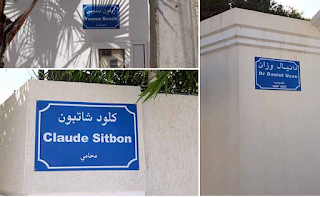 A Tunisian city where Islamist terrorists struck in 2015 has named four streets for local prominent Jews. The municipality of Sousse, a popular tourist resort, has announced that the streets, in the north of the city, memorialises  Claude Sitbon, a lawyer (not to be confused with the historian and sociologist of the same name); Daniel Uzan, a physician who died in 1985; Yvonne Bessis, a midwife; and the late Ichoua Ghouila-Houri, a city developer (who donated the Boujaafar park and a building for the disabled), the news site Kapitalis has reported.

JTA (via The Times of Israel) reminds us that the official promotion of Tunisian Jewish heritage counters a growing current of Islamist antisemitism:

” In 2015, the Islamic State claimed responsibility for an attack in Sousse that killed 38.

“The Tunisian Association for Support to Minorities, or ATSM, which often flags expressions of anti-Semitism, praised the Sousse municipality’s move and called it “important for encouraging multiculturalism.”

“Last year, Tunisia joined several other Arab countries in banning the film “Wonder Woman,” apparently because its lead character is portrayed by the Israeli film star Gal Gadot. The Jewish-French philosopher Bernard-Henri Levy, who is not Israeli, was greeted during a 2014 visit to Tunisia by dozens of Islamists carrying signs calling on “Levy the Zionist” to leave.

“The invitation to a Tunisian festival in July 2017 of the Jewish comedian Michel Boujenah provoked protests in Tunisia that ATSM said were anti-Semitic. Tunisia has several pending bills, introduced by Islamist and secular nationalists, proposing a blanket boycott on Israel and a ban on any Israelis from entering the country.”

A potted history of the Jews of Sousse