ToI’s Adam Rasgon reports that even PA President Mahmoud Abbas was “visibly angry” about the attack, telling a group of former Israeli lawmakers that he condemns violence after bringing up the stabbing at the beginning of a meeting in Ramallah, according to former minister Yossi Beilin, an architect of the Oslo Accords who was at the meeting.

Wonderful! Abbas is supposedly “visibly angry” at a terror attack! Peace is at hand!

Except that nowhere in Arab media is this supposed anger reported.

The official Wafa news agency didn’t report on Ari Fuld’s murder, but it reported on his shooting his murderer:

Bethlehem, 16-9-2018 (WAFA) – Israeli occupation forces on Sunday beat Khalil Yousef Ali Jabarin, 17, from Yatta village, south of Hebron, on the pretext that he was trying to carry out a stabbing near the Asion junction south of Bethlehem.
Security sources confirmed to our correspondent that the boy Jabarin was wounded and described as moderate.

The Fatah Facebook page showed a photo of Ari Fuld in front of an Israeli flag and an old photo of him in uniform, describing him as a “settler” killed in an “operation,” which is as much justification of murdering him as one can find in the Arab world. 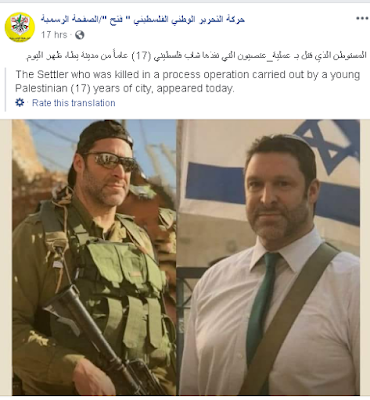 Fatah is led by the supposedly “visibly angry” Abbas.

However, the Fatah Facebook page – in trying to show that Fuld was a staunch Zionist and settler who deserved to be murdered – reproduced a video Fuld made in Jerusalem.

This video is as good an obituary as one can find for Ari Fuld. It shows his passion for Israel and for spreading the truth.

Fatah, in a backhanded way, has proven the difference between good and evil.