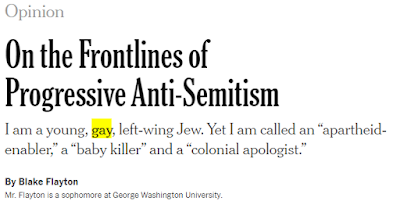 The New York Times published an excellent op-ed by Blake Flayton, a self-described young, gay, left-wing Jewish college sophomore who considers himself a progressive on all social issues.

Yet he is also a Zionist – a Zionist who is ardently against “occupation” but a supporter of the Jewish state.

As such, he is subjected to abuse within his own progressive circles:

Before I arrived on campus, I could proudly say that I was both a strong progressive and a Zionist. I didn’t think there was a conflict between those two ideas. In fact, I understood them as being in sync, given that progressives have long championed the liberation movements of downtrodden minorities. I viewed — and still view — the establishment of the state of Israel as a fundamentally just cause: the most persecuted people in human history finally gaining the right of self-determination after centuries of displacement, intimidation, violence and genocide. For me, this remains true even as I oppose the occupation of the West Bank. It is my Zionism that informs my view that the Palestinian people also have the right to their own state.

But my view is not at all shared by the progressive activist crowd I encountered on campus. They have made it abundantly clear to me and other Jews on campus that any form of Zionism — even my own liberal variant, which criticizes various policies of Israel’s prime minister, Benjamin Netanyahu, and seeks a just two-state solution to the Israeli-Palestinian conflict — is a political nonstarter. For this group at my school, and similar groups on campuses and cities around the country, Zionism itself is, to parrot the Soviet propaganda of several decades ago, racist. And anybody who so dares to utter the words “right to exist” is undeniably a proponent of racism.

Given that almost all American Jews identify as “pro-Israel,” even as the majority of us are also critical of Israeli government policy, this intolerance affects huge numbers of young American Jews. I am one of them.

At many American universities, mine included, it is now normal for student organizations to freely call Israel an imperialist power and an outpost of white colonialism with little pushback or discussion — never mind that more than half of Israel’s population consists of Israeli Jews from the Middle East and North Africa, and that the country boasts a 20 percent Arab minority. The word “apartheid” is thrown around without hesitation. The Israeli-Palestinian conflict is repeatedly dragged into discussions ranging anywhere from L.G.B.T.Q. equality (where to mention Israel’s vastly better record on gay rights compared with that of any other country in the Middle East is branded “pinkwashing”), to health care to criminal justice reform.

At a recent political club meeting I attended, Zionism was described by leadership as a “transnational project,” an anti-Semitic trope that characterizes the desire for a Jewish state as a bid for global domination by the Jewish people. The organization went on to say that Zionism should not be “normalized.” Later, when I advised a member to add more Jewish voices to the organization’s leadership as a means of adding more nuance to their platform, I was assured that anti-Zionist Jews were already a part of the club and thus my concerns of anti-Semitism were baseless.

I expected this loophole, as it is all too common across progressive spaces: groups protect themselves against accusations of anti-Semitism by trotting out their anti-Zionist Jewish supporters, despite the fact that such Jews are a tiny fringe of the Jewish community. Such tokenism is seen as unacceptable — and rightfully so — in any other space where a marginalized community feels threatened.

All of this puts progressive Jews like myself in an extraordinarily difficult position. We often refrain from calling out anti-Semitism on our side for fear of our political bona fides being questioned or, worse, losing friends or being smeared as the things we most revile: racist, white supremacist, colonialist and so on. And that is exactly what happens when we do speak up.

Rabbi Jill Jacobs of T’ruah, “the rabbinic call to human rights,” had a reaction that, while admitting the antisemitism of the Left, blamed the mainstream Jewish community.

This piece is important on two fronts:

1) Yes, it’s antisemitic to exclude Jewish students from groups unless they denounce Israel.

2) Mainstream Jewish community has contributed to problem by insisting that supporting Israel=supporting occupation.

That is–if there were a loud, unified Jewish voice saying clearly that occupation is moral wrong & a human rights violation an investing accordingly–rather than defending it–students (& others) would get  difference & we wouldn’t leave students like this one out to dry.

To be clear, there are lots of Jewish orgs fighting for Israel & against occupation– including the 10 in Progressive Israel Network

This is a self-serving, and quite wrong, assumption by Rabbi Jill Jacobs.

The things that Jewish students have to deal with from anti-Zionists are about Israel’s existence, not “occupation.” There is no evidence that these antisemitic attitudes would change if Jews all belonged to J-Street or other anti-occupation Jewish organizations.

I would also add that the anti-occupation Jews on campus spend very little time defending Israel. They spend FAR more time attacking it.  Do you honestly think that this attitude HELPS Israel against the haters? I do not see any Yom Ha’atzmaut activities actually celebrating Israel on campus sponsored by J-Street or similar groups. On the contrary, the only message I see from them towards Israel is criticism, not support.

Face it, J-Street U is a gateway drug for the anti-Zionist “Jewish Voice for Peace,” not for aliyah.

There are some extremely eloquent defenders of Israel who are also against occupation. Nurit Baytch and Petra Marquardt-Bigman are two of many. The difference between them and J-Street is night and day. They love Israel while J-Street gives the impression of being the opposite.

They show it is possible to be a pro-Israel, liberal Jew. Even though I disagree with them aboutJudea and Samaria, I have enormous respect for them and how they defend Israel. When does T’ruah or J-Street actually defend Israel without the list of caveats of what they hate about Israel? What kind of message does that give to students on campus? When all they hear is how bad Israel is, is it any wonder the anti-Zionists are making so much progress?

What does T’ruah and J-Street U actually do to combat anti-Zionism? What programs have they put together to teach how important Israel is to Jews? What op-eds have members written wholeheartedly defending Israel? If there are any examples, they are lost in the glare of the opposition to Israel that we see every day from groups like that.

If you want to combat anti-Zionism on campus, be a proud Zionist. Not an apologetic one.

Blake Flayton tries to be a proud Zionist, and the reason it is so difficult for him is because of the lack of support he gets from groups like J-Street who are spending all their time ripping on Israel.