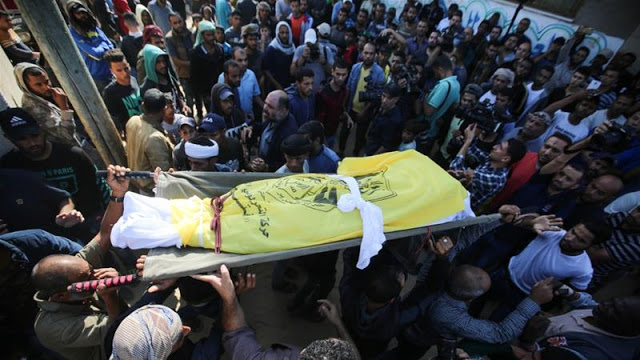 I count 35 people killed in the recent fighting in Gaza from Monday through Wednesday. (The Gaza health ministry counts 34, but I have reports of another killed the first day, Mohammed Shakal, not on that list.)

I count 14 who were members of Islamic Jihad Al Quds Brigades, 2 members of the Popular Resistance Committees Nasser Brigades and 3 from Fatah’s Al Aqsa Brigades.

There were 5 human shields – people killed when legitimate targets purposefully stayed near them.

Three children at their father’s carpentry workshop were tragically killed when the IDF attacked two terrorists right outside the shop. One bystander was killed when Israel targeted three Fatah members. The fifth was Al Ata’s wife.

In one incident where the IDF bombed a motorcycle I don’t have enough information to know what the IDF was targeting. A father and two sons of the Ayyad family were killed. I have suspicions about the older son, Islam Raafat Mohamed Ayyad, 24, an imam who may have been a terrorist based on his funeral shroud showing the Al Aqsa Brigades logo, but that is not conclusive evidence this time – even children were wrapped in various terror flags.

The most infamous incident of the week’s conflict was the bombing of the Al Sawarka (Abu Malhous) houses in Deir al Balah, killing eight members of the family. After a day of conflicting reports, the IDF admitted that it thought the house was empty and that it was used for terrorist infrastructure.

Under international law’s principle of distinction, a military commander can make his best judgment based on the information available to him at the time as to whether a target is legitimate or not. He doesn’t have the luxury of too much time; if he is fed normally-accurate intelligence that the target is empty and used for military purposes, it is enough. This was a true tragedy but it is not a violation of the laws of armed conflict.

Here is the entire list that I put together of the fatalities and circumstances.