For the second year running, prayers will be recited in  synagogues across the world in remembrance of Jews buried in inaccessible cemeteries in Arab lands.

This year the mass Hashkaba (kaddish) will take place on 30 November, the official day to commemorate the exodus of Jewish refugees from Arab countries and Iran, which in 2019  falls on Shabbat.

The mass Kaddish is the initiative of  a Montreal resident of Iraqi origin, Sass Peress. For decades, families have been prevented from reciting prayers at the gravestones of their loved ones buried in Arab lands.

Last year,  18 synagogues in Canada, the US, the UK, Mexico and Germany recited he prayers. This year, Sass Peress is hoping that 50 congregations will  take part,  ‘ helping to create a positive and cathartic event for all’ .

Inspired by a Facebook post by a Muslim friend in the UK referring to Miss Israel’s selfie with Miss Iraq in 2017, Peress embarked on a project to locate and clean up his grandfather’s grave in the Sadr City Jewish cemetery in Baghdad. This was done in secrecy in case of official interference.

“While some Iraqi Muslims stepped up and saw the positive in helping me discover my grandfather’s grave, some tried to get in the way, to the point of threats against the lives of those who sought to help me, “Peress recalls.

Before long the clean-up was extended to 150 graves. Their inscriptions were photographed and translated into English by Sami Sourani, a historian of the Iraqi-Jewish community based in Montreal. Peress hopes to obtain a photographic record of all 3,000 graves in the Sadr City cemetery. 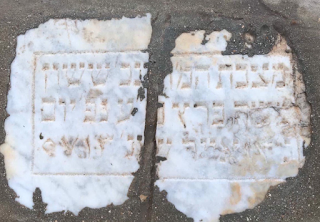 “If your synagogue or community centre would like to join the mass Hashkaba please contact Sass Peress (sass@peress.me)