“All of this isn’t to say that hate speech doesn’t matter. It does. But white supremacists are not joining the Nation of Islam, not now nor ever.”
“Deciding Who We Throw Away,” Cassady Fendlay, Communications Strategist, Writer, and Editor

Actress Alyssa Milano made a welcome point when she criticized the Women’s March leaders for not condemning the Antisemitism of Louis Farrakhan. Findlay’s evasion of the issue took the form of a personal attack on Milano and anyone associating with her:


Alyssa Milano and all the white women lined up behind her are actually enforcing the power of white supremacy through their misguided attempt to challenge hate speech.

But what is interesting is Fendlay’s apparent ignorance of the history of the Nation of Islam and how it has affiliated with white supremacists over the years.

According to an article in the Pittsburgh Courier:


Malcolm X admitted publicly that he met with the heads of the Ku Klux Klan [in 1960] to negotiate a land deal for Elijah Muhammad. Malcolm said, “They had some very responsible persons in the government who were involved in it and who were willing to go along with it. They wanted to make this land available to him so that his program of separation would sound more feasible to Negroes and therefore lessen the pressure that the integrationists were putting upon the White man. I sat there. I negotiated it. I listened to their offer. And I was the one who went back to Chicago and told Elijah Muhammad what they had offered.”

The following year, on June 25, 1961, ten members of the American Nazi Party, including their leader, George Lincoln Rockwell, arrived at a Nation of Islam rally in Washington, DC. The Nation of Islam leader Elijah Muhammad was supposed to be the keynote speaker but ended up canceling because of illness.

Instead, Malcolm X spoke, and afterwards led an appeal for donations. Rockwell contributed $20, for which Malcolm X thanked him:


You know that we call you niggers. But wouldn’t you rather be confronted by honest white men who tell you to your face what the others all say behind your back? Can you really gain anything dealing with a bunch of cowardly white sneaks? The yellow-liberals who tell you they love you, privately excluded you every way they know how. I am not afraid to stand here and tell you I hate race-mixing and I will fight it to the death. But at the same time, I will do everything in my power to help the Honorable Elijah Muhammed carry out his inspired plan for land of your own in Africa. Elijah Muhammed is right — separation or death! [p.30, footnote 86]

The New York Times reported in October 1985 of Farrakhan and a former head of the KKK working together:


The former head of the Ku Klux Klan in California said today that he headed a ”white nationalist” delegation that attended a speech here last month by Louis Farrakhan, leader of a Black Muslim group, and that talks between the black and white groups have been going on for a year.

The former Klan leader, Thomas Metzger of San Diego, said that he and nine members of his organization attended the Farrakhan rally here Sept. 14 as guests of Mr. Farrakhan and that they contributed $100 to support the Muslim’s cause.

At the time, Metzger described himself as the head of the White People’s Political Association, which he described as a ”white nationalist” organization. 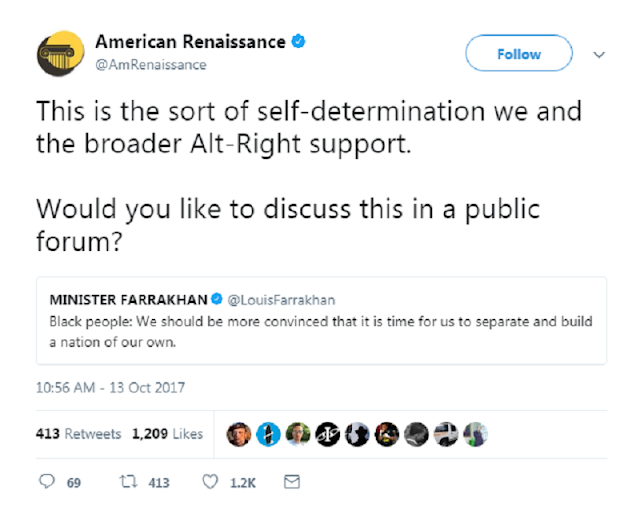 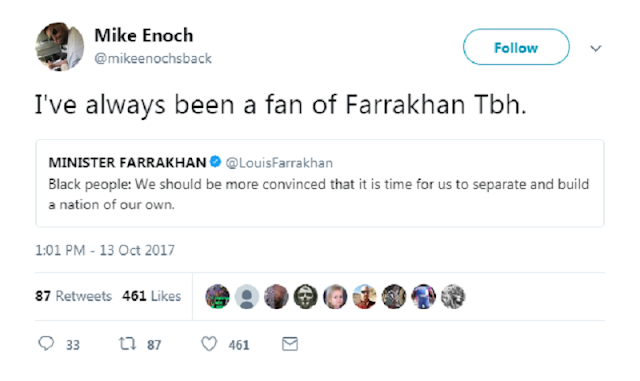 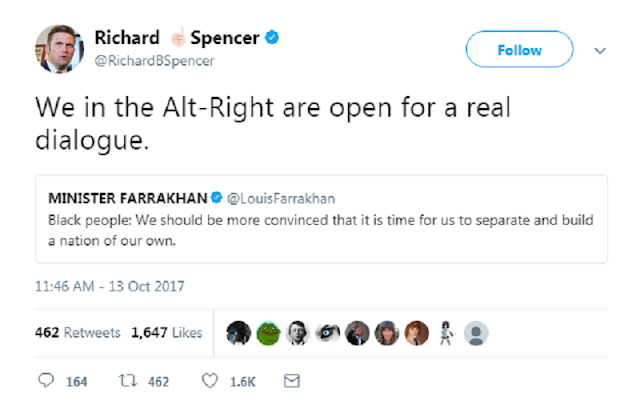 Farrakhan responded in turn. Though stopping short of accepting dialogue, he did not repudiate these white supremacists either. Instead, he referred to them as “white people of intelligence”:


“Do you know white people of intelligence feel the same way? Somebody told me that the alt-right, Mr. Trump’s people, had a tweet or something – we kinda like what Farrakhan and the Nation of Islam is saying, we with them to separate in a land of their own. I said: very good, alt-right, ya’ll want to talk about it? Talking has been done, nothing to talk about because now it’s either separation or death.”

And why should Farrakhan repudiate them?

After all, they are unified in their hatred of Jews.

But why work together?

In his article in Vice magazine, Sam McPheeters suggests what the Nation of Islam and Rockwell’s American Nazi Party saw in each other:


Rockwell and Muhammad saw each other as authentic, as people willing to speak the truth—their versions of it—no matter the cost. Their marketing to their constituencies depended on this image, and each man drew legitimacy from the appearance of being a straight shooter. Rockwell’s existence was useful to the NOI as a recruiting tool, his physical presence a testament to Muhammad’s own authenticity.

Following the success of Martin Luther King using non-violence, Rockwell doubled down on his hate while Malcolm X softened his tone.

And as for Farrakhan and his connection with Metzger on the one hand and his refusal to condemn the white supremacists who offer dialogue on the other, maybe Elijah Muhammed understood Farrakhan best:


“We cannot ignore him,” Mr. Muhammad said, adding that he feared that undue attention could fuel Mr. Farrakhan’s movement because “it is not only the media that have to live off sensationalism.”