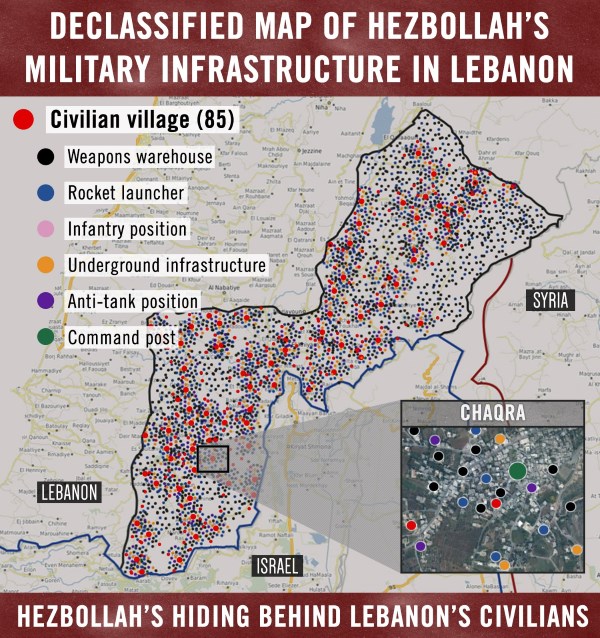 If I’ve learned anything in my relatively comfortable and placid life it is that despite my good luck, evil is real. Sometimes it grows and sometimes declines. Today it’s gathering strength.

Hezbollah came into being in 1985, as a response to the Lebanese Civil War, Western interventions, and the Israeli invasion and its aftermath. Its stated goals were the elimination of Western influence, the assertion of Islamic (Shiite) dominance over Lebanon, and the destruction of Israel, which its founders saw as a tool of the West and an ally of Lebanese Christians.

Its attitude toward Israel is shown by this snippet from an “open letter” published by its founders in a Lebanese newspaper: 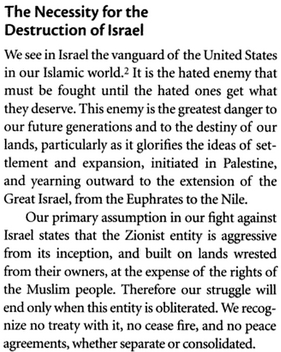 The month-long Second Lebanon War in 2006 was fought by an IDF grown complacent from years of occupation duty and a leadership team (PM Ehud Olmert, Defense Minister Amir Peretz, Foreign Minister Tzipi Livni and Chief of Staff Dan Halutz) who were only marginally competent. While Hezbollah suffered heavy losses and much Lebanese infrastructure was destroyed, Israel was unable to stop the heavy rocket fire on the northern part of the country, which continued until a UN-brokered cease-fire came into effect. 120 IDF soldiers and 43 Israeli civilians were killed, and as many as a half-million Israelis were displaced as a result of Hezbollah rocket attacks. Israel tried to destroy Hezbollah’s leadership both from the air and by commando operations, and failed to do so. UN Security Council Resolution 1701, which was negotiated by Livni to end the fighting, proved worthless in preventing Hezbollah from rearming and rebuilding military infrastructure. Wikipedia called the result a “stalemate,” and I agree.

By 2016, Hezbollah has achieved most of its goals. It now completely controls Lebanon for all intents and purposes. It has not destroyed Israel, and after its bloody skirmish with the IDF ten years ago, it seems to have decided that it will wait until its chance of success is much greater. Over the years it has lost most of its autonomy to its Iranian patron. Nothing illustrates this more clearly than the way it has been used to fight – and suffer many casualties – on behalf of Iranian interests in Syria.

Militarily, Hezbollah seems to grow stronger as time goes on, despite its losses in 2006 and more recently in Syria. In the 2006 war, it fired about 4,000 rockets into Israel, mostly inaccurate short-range Katyusha or Grad rockets with a range of about 30 km. Although it possessed some longer-range rockets, they were destroyed by IAF bombardment before they could be launched. Hezbollah had about 13,000 rockets at the beginning of the war.

Today, thanks to Iran, it is estimated that Hezbollah has at least ten times as many rockets, many of them capable of longer ranges and/or larger payloads, and some with guidance systems that make it possible to hit a precise target, like a military base or industrial installation. Hezbollah has also made plans for incursions into Israel to kidnap civilians or even to hold territory, possibly by way of tunnels like those constructed by Hamas. If Hezbollah is allowed to actualize its plans, the destruction wrought in Israel will be worse  by far than in any previous war.

War is terrible no matter how it is fought, but Iran has planned our next one with a particularly diabolical twist: as the map preceding this post shows, it has embedded rocket launchers and other military infrastructure in civilian residential areas. A 2013 report describes an Iranian-funded program to enlist residents of southern Lebanon as human shields:

…the Shiite terror group launched a major social/real-estate project that bolstered its political standing: It purchased lands on the outskirts of the villages, built homes on these lands and offered them to poor Shiite families at bargain prices (to rent or buy), one the condition that at least one rocket launcher would be placed in one of the house’s rooms or in the basement, along with a number of rockets, which will be fired at predetermined targets in Israel when the order is given.

In addition, Hezbollah has set up camouflaged defense positions in villages which contain advanced Russian-made anti-tank missiles it had received from Syria. Hezbollah gunmen have planted large explosive devices along the access roads, and inside the villages structures that were purchased by the organization were converted into arms caches.

In this manner some 180 Shiite villages and small towns situated between the Zahrani River and the border with Israel have been converted into fighting zones in which Hezbollah is preparing – above and below ground – for the next conflict with Israel. Hezbollah has some 65,000 [now more than twice that number — vr] rockets and missiles at its disposal.

The deliberate use of civilians as shields is a war crime, prohibited by the Geneva Convention. But according to the rules of war, an action that causes casualties among civilians is not considered ‘disproportional’ if the force used was necessary to achieve a military objective. In other words, if a Lebanese family is killed because there is a missile launcher firing from its garage, Hezbollah has committed a war crime, and Israel has not.

Israel has warned Hezbollah and the Lebanese government on numerous occasions over the past several years – most recently when it declassified and released the map above on Tuesday. Officials from the Prime Minister on down have made it clear that a rocket attack will be met with overwhelming force targeting the launchers and other infrastructure, regardless of where it is located. The IDF’s Deputy Chief of Staff recently said that the next war would do “devastating damage” to Lebanon. They have correctly stated that both morally and legally, Hezbollah will be responsible for civilians that are hurt or killed as a result.

But emotional appeals are powerful, especially when it is claimed that children are being hurt. In 2006, Hezbollah made use of humanitarian concerns – both real and fabricated (fascinating link!) – to sway opinion against Israel. Even Condoleezza Rice was influenced to call for a cease-fire by the bombing of a building in which civilians including children were killed (although it’s likely that the number of casualties was inflated and heart-rending photos were faked).

This technique, also used by Hamas, will certainly be repeated. During the 2014 Operation Protective Edge in Gaza, US Secretary of State John Kerry sarcastically referred to a “pinpoint operation” after 13 IDF soldiers and 62 Palestinians were killed in the battle of Shuja’iyya, where civilians were warned to evacuate but did not do so because of Hamas threats. President Obama also reacted to a widely-criticized attack on a UN school in Jabaliya and even held up shipments of arms to Israel as a result.

The use of human shields is therefore an effective political and psychological weapon, either because officials and the public are actually affected by emotional appeals or find it convenient to use them as justifications for the actions that they would like to take anyway.

But today Hezbollah is entirely different from Hamas. Tehran has built it into an existential threat. If war breaks out we will have to unleash as quickly as possible the most powerful conventional weapons at our disposal against the rocket launchers. Look at the map! Perhaps such an attack would kill tens of thousands in Lebanon. But there’s no alternative. Israel is a tiny country with a concentrated population. We can’t absorb hundreds of missiles an hour, especially accurate ones with heavy payloads. We can’t afford to wait, not even a few minutes, once it starts.

Incidentally, if Hezbollah and Iran want to reap the benefit of the human shield strategy, then now is the time to do it. I suspect that Trump and his advisors would be less biased against Israel than the present administration, and therefore less likely to interfere with Israel’s response. Our enemies probably agree with me, and this means war is more likely in the next two months than at a later time. Maybe that’s why our officials have made the effort just now to ensure that Iran and Hezbollah understand the consequences of their possible actions.

It only makes sense to threaten Iran as well. The regime would be happy to sacrifice Lebanon and its people to destroy Israel, and the regime is pulling the strings, not Nasrallah. There need to be consequences for Iranian leaders too.

Evil is growing stronger and good is retreating. Deterrence may put off the reckoning for a time, but unless something completely unforeseen happens, the day will come when our PM will have to give the order to save one nation by destroying another. I’m glad I’m not the one to do it.