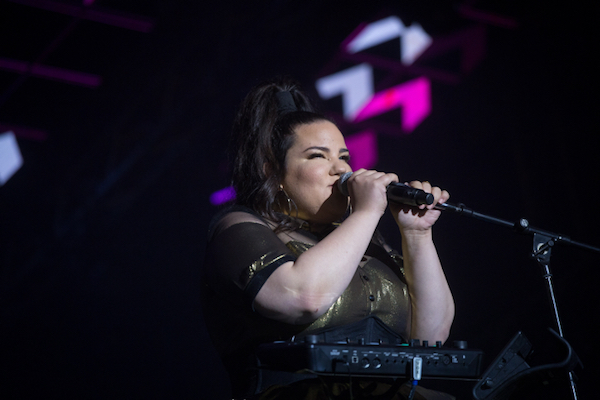 I’m shaking my head at an article on the far-Left Israeli site +972 by Orly Noy, about BDS targeting Israeli Eurovision entrant Netta Barzilai:

Israel is buzzing with excitement over the country’s contestant in this year’s Eurovision, and for good reason. Netta Barzilai is talented, has an awesome vibe, and is a strong female character who bucks all of the traits we have become used to seeing in a female performer. If you are a left-wing, Jewish feminist, and even if you’re not, it’s hard not to fall in love with her.

So it wasn’t surprising that a campaign by Israeli boycott activists asking European viewers not to vote for Barzilai managed to rile so many people, including in various left-wing Israeli circles — and no small number of my friends.

I don’t know anything about Barzilai’s political views but I don’t get the impression that she has any special affinity for militarism or that she likes anything about the killing of innocent people. My impression was actually the opposite, and that’s the point.

One of the fundamental truths with which the boycott movement attempts to confront Israeli society is that all of us, even the humanists and human rights lovers among us, are responsible for the crimes of the occupation, whether we participate in them directly or indirectly.

Netta Barzilai is a means for Israel to show the world that we are normal and pretty and creative, and that we send stunning representatives to compete in the Eurovision. In a way, that’s not a false representation of reality. Indeed, we live our lives like any other people trying to make it in the world, and we have a real culture and real musicians to be proud of — like Netta Barzilai. And while it is true that we Israelis do not live the occupation as part and parcel of our daily lives, the occupation is a part of us and who we and our society are and have become. That we have succeeded in creating a conscious separation between our lives and the occupation is our tragedy. The boycott movement is simply trying to stop the rest of the world from making the same mistake.

What a load of crap.

The BDS movement is not based on morality. It is based on hate. Its leaders freely admit that their goal is the destruction of Israel, not the end of “occupation.” It is the direct descendant of the anti-Israel movements before the “occupation” that also tried to justify their hate based on the fig leaf of human rights – as did the Arabs who attacked the Jews in 1947 months before Israel declared itself to be a state. Their speeches in the UN also pretended to be concerned with human rights. Read them – they sound eerily familiar, yet it is obvious that their problem was with Jews having political power, not the lofty standards of human rights or protecting the UN Charter as they claimed.

Any objective observer can see that the haters of 1947 were animated by their antisemitism, not their love of justice or peace. BDS is exactly the same. The word “Zionist” elicits the same knee-jerk and violent hate that the word “Jew” has throughout history. BDS supporters who are less careful over their words in social media than their leaders regularly will call Israel “satanic” – they simply substitute “Zionist” for “Jew” but the hate remains the same. Justice and peace and human rights are the excuses to make their hate appear justified. But it is still hate, it is still ugly, and any real supporter of human rights should recognize this and fight against it, not support it.

Orly Noy might want to flagellate herself over the “occupation.” Maybe one day she will set herself on fire in support of the Palestinian Arabs she cares about so much. But she knows, deep down, that if Israel would withdraw from every inch of the territory it won in a defensive war, the hate that the BDSers feel for her would not be reduced in the least.

Which is exactly what BDS does.

The BDS movement is a hate group just like the KKK, and their arguments can be demolished just as easily as those of any white supremacist group – but only if one is willing to wake up enough to notice that their “human rights” and “justice” and “legal” arguments are mere justifications for hate. It is a shame that so many people who care about human rights can be as deluded as Orly Noy is.