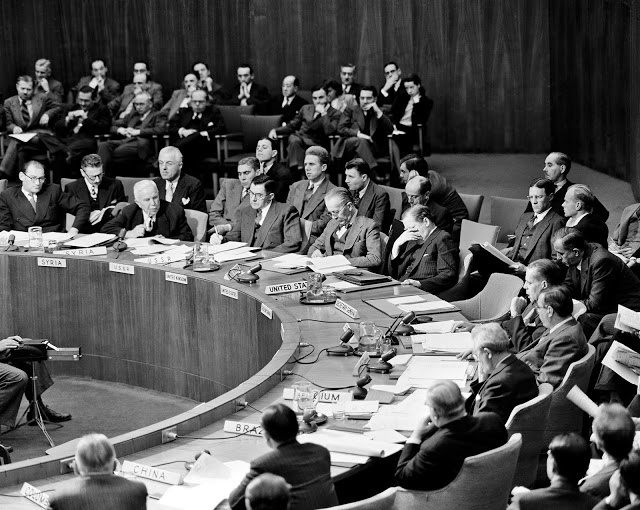 In my last post I invited readers to look at the arguments that Arabs advanced against the UN partition plan that would have granted Jews a tiny, impossible to defend state.

The Syrian ambassador sounds a lot like Mahmoud Abbas today.

…The Arab delegations, as everyone knows, have not failed to point out to their colleagues the real danger involved in the partition plan. On several occasions, we have reminded the world that this Organization cannot trample on its own Charter, to which it owes its existence, without running the risk of dealing itself a very dangerous blow.

We have voiced here the uneasiness of the Arabs in Palestine and in all the Arab countries. In their opinion this plan is contrary to the principles of justice and to their natural rights, since their right to independence is not questioned.

Yesterday, however, certain delegations invoked, in support of the Jewish argument, an alleged “historic right” to Palestine. Even supposing that this right existed, it could not be considered equal to the historic and acquired rights of the Arabs, rights which we have moreover explained to you on more than one .occasion.

By quoting, in the Ad Hoc Committee, whole pages of the Jewish Encyclopedia, we have been able to prove that the Jews of Eastern Europe are not related in any way to Israel and that they are purely of Russian Khazar origin.

The article he is referring to in no way says that.


…As we have already stated in the Committee, if it had been only a question of Jewish refugees fleeing from persecution and terrorism, we should have received them not only in Palestine but also in all the Arab States. However, as everyone has already realized, we are faced, in this case with no more than a political scheme of an imperialist nature in which all ambitions coincide and the two extremes meet.

The Polish delegation, which is usually so punctilious with regard to interpretations of the . terms of .the Charter, is silent when it is a question of violating that same Charter, because that violation is aimed at founding a Jewish State in Palestine which would allow Poland to get rid of its own Jews.

…The United States Government is fighting communism not only in its own country but everywhere; it is attacking communists from Hollywood to the frontiers of Manchuria; it is deporting foreign communists even if they are recommended by very highly placed persons; it is granting all sorts of loans to fight communism in Europe.

But if the Black Sea ports could pour half a million communists into Palestine today, the delegation of the United States of America would be all the happier so long as Palestine was swarming with Jews. They are not satisfied with the one hundred and fifty thousand communists who are already in Palestine.

No plan has ever been more contrary to logic or to social, political and economic laws; no plan has ever been more absurd in its financial and economic difficulties, and in its political and administrative complications; no proposal has been adopted with more misgiving, one might even say repugnance; no plan has been defended with more propaganda and less courtesy. …

You need only cast a glance at the map drawn up by Sub-Committee 1 to see that the whole affair is only a conspiracy. The southern part of Palestine, inhabited exclusively by Arabs, has been given to the proposed Jewish State on the excuse that a desert region like the Negeb is of no use to the Bedouins. This is a type of logic quite peculiar to the Zionists and their friends; they claim that a desert like the Negeb or Sinai is useless to the Bedouins but can be of great use to the Jews of Warsaw and Riga. What logic!

The truth is that the Zionists and their friends have other aims in mind. That is proved by the fact that they have made the territory of the Jewish State extend to the Red Sea; that is a threat to the Suez Canal, the Islamic Holy Places of the Hedjaz, the interests of all the Arab countries in the Red Sea region, and the interests of Ethiopia. In short, the United States delegation and the other delegations in favour of this plan consider it impossible and unjust to subject six hundred thousand Jews to a decision making Palestine one State; but these same delegations want the Arabs in Palestine and all the independent Arab States, with a total population of thirty million people, to be subject to an illegal decision contrary to the Charter and their vital interests.

I hope that the good people of this great and truly democratic country, the United States, will wake up one day, open their eyes, see things clearly and demand that their country’s policy shall be independent of that of the Zionists.

As for us, we will never recognize this proposed partition, and we reserve the right to act accordingly.

One more word. Before concluding, I appeal to your consciences. May I remind you that, in this plan, the Charter’s essential principles of justice and the dignity of the United Nations are at stake. I am sure that you will reflect, and that you will bear in mind all the disadvantages and dangers of this plan.

This has it all – antisemitism (“swarming with Jews”), accusations that Jews are all Communist, that they are not really Jews but converts from Russia, that opposing a Jewish state is a principled position, that creating a Jewish state would threaten the entire Arab world with its colonialist aims, that “justice” means no Israel, that the US bends its will to the “Zionists.”

This speech is remarkably similar to things Palestinian leaders have said only weeks ago.The same arguments against “occupation” today were used against the very idea of Israel 70 years ago.

Which shows that today’s arguments are really not motivated by “occupation” but by Israel having the chutzpah to continue to exist and defend itself.