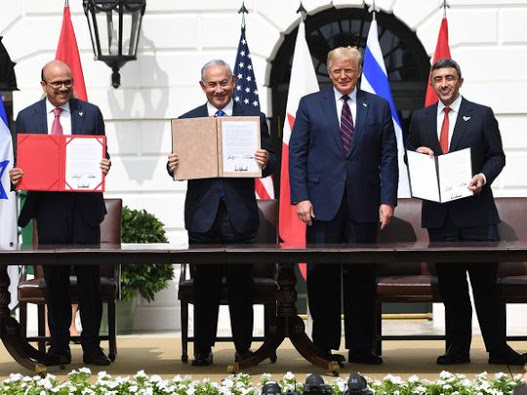 People just don’t get it:

The so-called Abraham Accords is not a contract. It is not even a deal.
It is closer to a love affair.
What has Israel wanted more than anything else since 1948?
To be accepted as a permanent part of the Middle East by the Arab world. More than that, it has wanted Arabs (and the world) to accept that Jews have equal rights to live in the Middle East as sovereigns.
What have the UAE and Bahrain and other Gulf states wanted more than anything else?
To be accepted by the world, especially the Western world, as equals. All that investment in skyscrapers and universities and tolerance initiatives are meant to show the West that Arabs and Muslims are not backwards people but are modern and forward-thinking.
Ed Husain writes it perfectly:

In my thirties, I lived in New York and Washington where I advised the US government. I saw the suspicion of Muslims in the eyes of American officials. It always boiled down to something unspoken: show us peace in Islam; stop talking about it.
And that is exactly what the Abraham Accord is doing: showing peace between peoples, not only preaching it. The accord represents an important opportunity to further reject “Islamophobic” accusations of terrorism and anti-Semitism. We can say: “We believe in one God. Peace is possible. A new way of co-existence is achievable. We are not pawns for the mullahs of Iran or the Muslim Brotherhood. Look at the UAE.”

The UAE and Bahrain can give Israel what it so desperately wants – acceptance of Jews and the Jewish state as equals. And Israel can give the Gulf states what they so desperately want – acceptance from a nation that is the envy of the West in innovation, science, medicine and high tech.
Most couples aren’t so perfectly matched.
The possibilities are endless. Imagine Ramadan miniseries dramas being filmed in Israel and hundreds of millions of Muslims seeing what the nation is really like. Imagine other Arab states seeing a successful UAE and wanting to emulate it. Already I am seeing the op-eds of Arab newspapers that are showing interest in Jewish history in the region, and tentative talk from such traditionally antisemitic countries as Iraq and Lebanon as to the possibility of recognizing Israel.
The only people who are against this agreement are the people who are against Jews being treated as equals.