“The leadership of the U.S. Muslim Brotherhood (MB, or Ikhwan) has said that its goal was and is jihad aimed at destroying the U.S. from within.

The Brotherhood leadership has also said that the means of achieving this goal is to establish Islamic organizations in the U.S.  under the control of the Muslim Brotherhood.

Since  the  early  1960s, the Brotherhood has constructed an elaborate covert organizational infrastructure on which was built a set of public or“front” organizations.

The current U.S. Brotherhood leadership has attempted to deny this history, both claiming that it is not accurate and at the same time that saying that it represents an older form of thought inside the Brotherhood.

An examination of public and private Brotherhood documents, however, indicates that this history is both accurate and that the Brotherhood has taken no action to demonstrate change in its mode of thought and/or activity.”

That is the synopsis of a research report by Steven Merley for the Hudson Institute, on the Muslim Brotherhood in the United States. The entire report can be read here

The BBC’s Trump-despising Paul Danahar, however, affects to know better, as the following tweet shows: 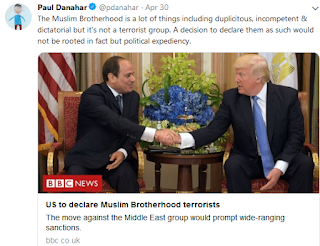 And the BBC’s abysmal Middle East editor Jeremy Bowen, who has of course has made a faux-pas or two when it comes to the Muslim Brotherhood, is of similar Trump-undermining mind.

There may be sound reasons (see here, for instance, and here) for hastening slowly in outlawing the Brotherhood, but presenting all views in a spirit of impartiality, as required of them by the terms of the BBC Charter, does not seem to be on those BBC men’s agenda.

Meanwhile, in Egypt, where the Muslim Brotherhood began:

“MPs this week demanded the Ministry of Awqaf (Religious Endowments) exert stricter control on mosques during the holy month of Ramadan.

Hussein Abu Gad, a member of the Future of Homeland Party, warned that extremist and takfiri clerics affiliated with the outlawed Muslim Brotherhood and other radical Islamist movements would seek to use the fasting month of Ramadan to infiltrate mosques and spread their perverted version of Islam.