Here are some headlines from Arab newspapers this morning:

* Despite the warnings, Jewish communities throng the streets of New York, USA – about two large funerals in Brooklyn

* Corona terrorism .. Jews deliberately transmit the epidemic to an Egyptian working in fire stations New York – about a story where haredi teens in Borough Park allegedly taunted a firefighter, who happened to be Egyptian, and one allegedly sneezed on him

This is just from the Arab media. There is a great deal more in English, in mainstream and social media.

Some of the stories being told are exaggerated or even false. But there are still religious Jews, today, who think that they are holier than everyone else, who feel that the rules don’t apply to them. I know there was a large outdoor minyan in Staten Island on Saturday. I know there is a daily minyan still in Flatbush. One can’t even keep track of the many other stories of engagement parties, funerals and weddings that occurred in recent weeks in Jewish communities.

If there is a definition of a chilul Hashem – “an act that brings discredit or reflects badly on the Torah, Torah scholars, the Jewish religion, or the Jewish people” – this is it.

Sure, some non-Jews are seen doing the same thing. That is not an excuse.
Sure, some of the publicized issues turned out not to be true. That doesn’t excuse the ones that are.
Sure, there are antisemites around who are willing to exaggerate anything bad Jews do. But that isn’t reason to defend it – it is reason to go above and beyond to ensure that no one has even an excuse to denounce Jews during this time.
Sure, it is only a tiny percentage of religious Jews violating the rules – but that tiny number’s actions have effects that end up with people dying and there is clearly not enough peer pressure in those communities to stop it.

Can you blame non-Jews, especially those who live nearby the Jews who spit on the rules, for being angry?

Some of my irresponsible Jewish brothers are not only dragging the name of all Jews through the mud – they are directly complicit in the deaths of too many prominent Jewish leaders already.

Here is a graph of the number of known cases in New Jersey communities with large Jewish populations over the past couple of weeks. 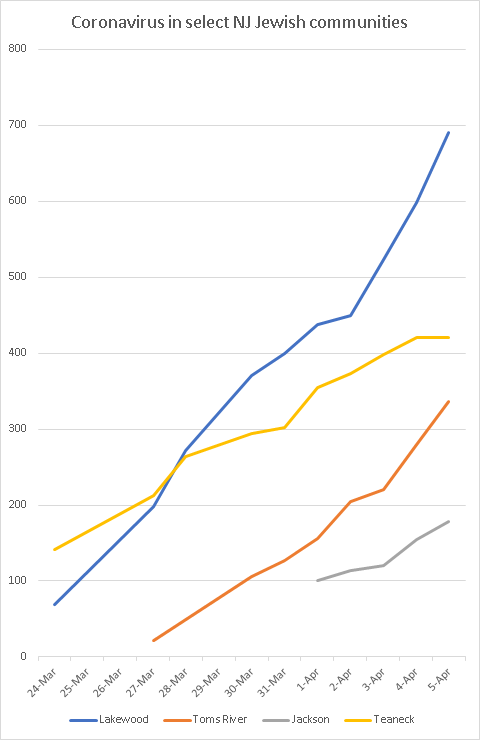 Teaneck Jewish leaders all instituted strict rules against gatherings on March 12, days before it was mandated by the state. Stories of Lakewood violations continued well into last week. Toms River and Jackson are satellite communities of Lakewood, but with a smaller percentage of Jews in the general population.

One does not need to be a math genius to see the difference in slopes between the major Jewish community that took action immediately and the ones that dragged their feet.

If there were similar statistics available for Borough Park and Monsey and Kiryas Yoel, I bet their curves would resemble Lakewood more than Teaneck.

Please, please, fellow Jews – don’t try to be “frummer” than your very leaders who are telling you to stay home. You aren’t doing any mitzvos with your davening (prayer) – quite the opposite.

All of these tragedies were preventable. We are all responsible for one another.