TOP NEWS
http://jewishrefugees.blogspot.com/2018/10/the-little-known-language-spoken-by.html
One of the foremost experts on the language of Jews in the medieval Arabic-speaking world is a 99-year Hungarian-born Jew, Joshua Blau. Emeritus professor at the Hebrew University, Blau gave this fascinating interview to Haaretz reporter Smadar Reisfeld (with thanks: Lily): 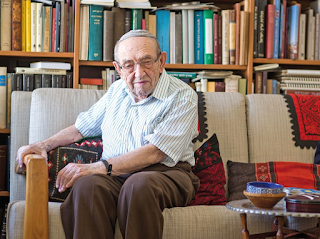 SR: We always say that Judeo-Arabic is a combination of literary Arabic and spoken Arabic, but how do we actually know what the spoken language was? After all, only the writings remain.

“Overall, we don’t know for certain – only from the 19th century, when the investigation of the different dialects began. As for the spoken Arabic of the Middle Ages, I can only guess, but there is some evidence that makes the guess an educated one. First, the grammar of the literary language is far more organized than that of the spoken language. Comparing the grammar of texts written in Judeo-Arabic to that of literary Arabic, we discover a great many changes, and the hypothesis is that they reflect the spoken language. As I mentioned, such deviations from literary Arabic characterize minorities, because they allow themselves to write in a lower register, in the way that people speak.
“An additional way to know what spoken Arabic was, is to find texts that are written phonetically, preserving the sound of the word and not its regular spelling. A few weeks ago, I received such a text in Judeo-Arabic. It deals with magic and is written in a completely free form. Nothing in it is consistent: The spelling is sometimes vocalized, sometimes unvocalized. A word that’s repeated several times is spelled differently each time. It’s awful writing, but marvelous from our perspective, because it provides information about the form of speech.” 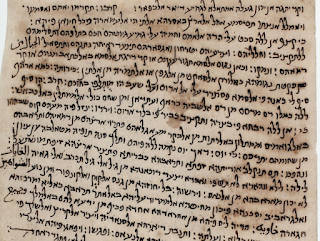 A letter written by Maimonides in Judeo-Arabic
SR:Apart from the mixture of registers – literary and spoken Arabic – Judeo-Arabic is also obviously influenced by the Hebrew to which Jews were exposed through the Scriptures. Are there words in Judeo-Arabic that were absorbed from Hebrew? Are there hybrid expressions, like those used by Palestinian Arabs, who say, for example, “khiar hamutz,” combining an Arabic word and a Hebrew word to produce “pickle.”
“The more religious the texts, the more Hebrew words they contain. Hebrew words that entered Judeo-Arabic include, for example, galut [exile], hayei sha’ah [living for the moment] and kame’ah [amulet].”
SR:If one were to read to an Arab in the Middle Ages a text written in Judeo-Arabic, would he understand?
“Definitely, unless there were religious terms, which he would of course not understand. For example, if ‘The Guide for the Perplexed’ had been read to him, he would have understood it in part.”
Read article in full