Israeli forces and police assaulted several Coptic Orthodox priests in front of the Church of the Holy Sepulchre, in the Old City of occupied East Jerusalem, and forcefully detained one of them on Wednesday morning.

Prior to the assault, the Coptic Orthodox Church organized a peaceful protest near Deir al-Sultan Monastery, located on the roof of the Church of the Holy Sepulchre, against an Israeli decision denying the church the right to conduct the needed renovation work inside the holy site.

It is noteworthy that the Israeli municipality of Jerusalem continues to conduct unauthorized renovation work for the Ethiopian Coptic Church section without the approval of the Coptic Orthodox Church.

Eyewitnesses said that Israeli soldiers and police officers surrounded the priests who were protesting, before assaulting and pushing them with excessive use of force, causing them several injuries.

Witnesses added that the Israeli police forcibly removed the priests and detained one of them, before allowing the Israeli municipality workers into the holy site.

The Islamic Christian Committee to Defend Jerusalem and Holy Sites condemned the assault on the Coptic Orthodox priests and denounced the intervention of Israeli authorities in the renovation works of the holy site.

Looks and sounds bad, doesn’t it? Especially this photo: 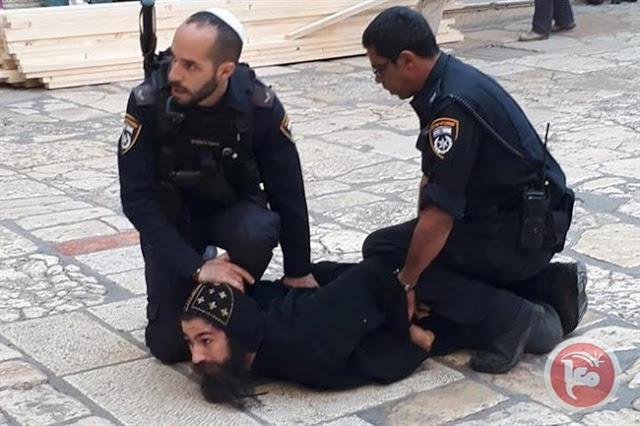 So why is Israel insisting on renovating the church? Why are the Copts opposed? How did this get violent?

Part of the answer comes from this article last year in ESAT, an Ethiopian news site:


The St. Michael Church at the Ethiopian quarter of the Church of the Holy Sepulchre in Jerusalem has been closed by Israeli authorities after its roof had collapsed due to construction on the roof top monastery by the Greek Church.

There is a long-running dispute among Christian sects as to the ownership of the Deir al-Sultan monastery, on the roof of the Holy Sepulchre. The Ethiopian Orthodox and the Egyptian Coptic Churches both claim ownership of the site.

The monastery is badly in need of renovation but dispute between the Churches got in the way of Israeli government efforts to move forward with the reconstruction.

On September 22, 2017, the roof of the St. Michael church collapsed due to construction by the Greek Church on the Monastery on the top that has been going on for 6 years.

Chair of the Ethiopian Community in Israel, Tesfahun Eshetu, told ESAT that the collapse had damaged relics and paintings in the Church. He said no one was hurt as it happened after services were done and everyone had left the church.

It isn’t Israel vs. Copts. It is Christians vs. Christians, and because they hate each other so much, no one can fix a roof.

The ESAT story is biased towards the Ethiopian claim to the monastery. This article seems to be a bit more fair. Israel has wanted the area to be safe and since neither the Copts or Ethiopians want to allow the other to repair the roof, Israel decided to do it itself. Last year, when Israel tries, the Copts stopped them (and got the Egyptian embassy to intervene on their behalf.)

The groups have been bitterly fighting for centuries. This Telegraph article in 2002 shows how much they hate each other:


Eleven monks were treated in hospital after a fight broke out for control of the roof of the Church of the Holy Sepulchre in Jerusalem, the traditional site of Jesus’s crucifixion, burial and resurrection.

The fracas involved monks from the Ethiopian Orthodox church and the Coptic church of Egypt, who have been vying for control of the rooftop for centuries.

It is not the first time monks have come to blows at Christendom’s most holy place, but it is one of the most serious in recent times.

As black-clad monks threw stones and iron bars at each other, the Israeli police were called to restore order. Seven Ethiopian monks and four Egyptians were hurt and one of the Ethiopians was reported to be unconscious in hospital.

The fight erupted over the position of a chair used by an Egyptian monk near the entrance to the roof.

He sits there to assert the Copts’ claim to the rooftop, which is mainly occupied by a few African-style huts which the Ethiopians, who have been evicted from the main church over the centuries, use as their monastery.

On a hot day, the Egyptian monk decided to move his chair out of the sun. This was seen by the Ethiopians as violating the “status quo” in the church, set out in a 1757 document which defines the ownership of every chapel, lamp and flagstone.

After several days of rising tension, the fists began to fly on Sunday. The Egyptians said their monk was teased and poked and, in a final insult, pinched by a woman.

Israel is responsible for the safety of Jerusalem, whether you consider parts of it occupied or not. One sect welcomes Israel’s repairs. Israel is trying to save the church despite the infighting, not to attack it. But the Palestinians are using this as a pretext to say that Israel violates holy Christian sites, and the PLO issued a statement of condemnation calling Israel a “rogue state.”

There is very little religion in this story. It is all politics.