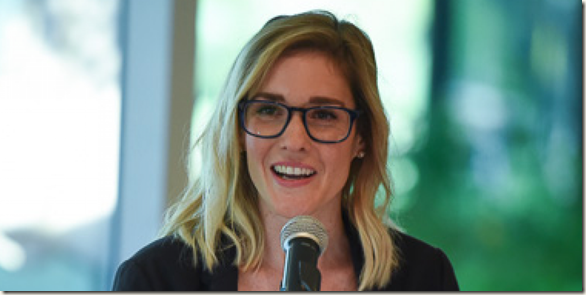 The American Jewish Committee announced the appointment of Holly Huffnagle to be their US Director  for Combating Antisemitism.

Huffnagle’s resume is impressive. She was previously the policy advisor to the Special Envoy to Monitor and Combat Antisemitism at the U.S. Department of State and a researcher at the U.S. Holocaust Memorial Museum in Washington, D.C. She has a master’s degree from Georgetown University where she focused on 20th century Polish history and Jewish-Muslim relations before, during, and after the Holocaust. Huffnagle was also a Scholar-in-Residence at Oxford University with the Institute for the Study of Global Antisemitism and Policy.

Howard Dean, the former presidential candidate and governor of Vermont, criticized the appointment of someonewith excellent credentials to lead the fight against antisemitism – because of her religion. 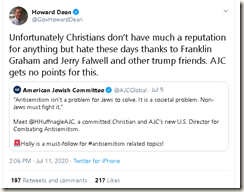 He tweeted, “Unfortunately Christians don’t have much a reputation for anything but hate these days thanks to Franklin Graham and Jerry Falwell and other trump friends. AJC gets no points for this.”

The AJC highlighted that she was Christian. In her words, “Antisemitism is not a problem for Jews to solve. It is a societal problem….It effectively requires non-Jews to fight it.”

Then, the purportedly Jewish organization IfNotNow doubled down on the criticism, by saying that a “white Christian” is inherently unqualified for a major role in fighting antisemitism.

This bigotry is even more astonishing when you realize that IfNotNow and other anti-Zionist socialists fully support Ali Abunimah, most definitely a non-Jew, when he defines Zionism itself as antisemitism as he has been doing for at least a decade:

And they are fully on board when Columbia University professor Joseph Massad, another gentile, says that Zionism and antisemitism are virtually identical.

Their affiliate Jewish Voice for Peace actually brought an Arab Muslim, Linda Sarsour, as an expert on antisemitism on a panel that was meant to whitewash, not teach, what antisemitism is.  No objection from the Left about that.

And then these hypocrites say that a “white Christian” cannot be a leader in the fight against Jew-hatred. (Their deliberate use of the word “white” is apparently meant to defend their use of Sarsour and Massad and Abunimah as definers of antisemitism – but all it does is prove how fundamentally bigoted they are.)

I would be thrilled if the AJC would hire members of groups where Jew-hatred is smoldering to be leaders in fighting it. It would be fantastic if the AJC could hire Arabs and non-Jewish Blacks to lead the way, to teach their communities what antisemitism is by the accepted Jewish definition and how to fight it.

Only a bigot would object.