Nobody really knows how many Jews were forced to flee areas of Palestine that became Arab in the 1948 war. According to a new book on the subject, the number could be as high as 70,000. David Shayne reports in the Jerusalem Post:

70 years ago, war ravaged what was, until May 15, 1948, the British-ruled “Palestine Mandate.” As is common in war, many civilians were uprooted. This well-publicized fact is the heart of the Great Debate over the justice or injustice of Israel’s founding. Arguments rage over the number of Palestinian Arab refugees – anywhere from 300,000 to 800,000 – and the causes of their dispossession.

However, a lesser known fact is that between 10% and 20% of “Palestinian” refugees were Jews. Not the 400,000-800,000 Jews who fled or were driven from Arab countries during the same time, but Palestinian Jews – or Israelis, as they were later called. 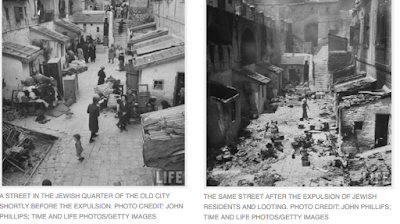 I first encountered this surprising fact in Benny Morris’s book 1948, where he puts the number of Jewish refugees at 70,000 but provides little discussion as to why the number is so large.

I asked acquaintances whom I consider to be knowledgeable, how many Jewish refugees the war created and all believed only few hundred to a couple of thousand – considering only the most devastating defeats, like the fall of the Old City of Jerusalem and the Etzion Bloc.

I wondered whether Prof. Morris, among Israel’s most valuable and important historians, made a mistake in citing such a high number, or perhaps a typo – may be he meant 7,000?

Enter Dr. Nurit Cohen-Levinovsky, a historian with the Rabin Center and author of Jewish Refugees in Israel’s War of Independence (Hebrew). Her book supports Morris’s claim – she estimates closer to 60,000 Jewish refugees – and provides a broad analysis of the causes and scope of that Jewish flight.