It is refreshing to see AP, at least, report that the unanimous reports on Friday of a child being shot dead by the IDF in Gaza are not so clear:

There are conflicting reports surrounding the death of a boy at a Gaza border rally that Palestinians initially blamed on Israel.
Israel’s military said their evidence shows the 11-year-old was hit by a rock thrown by protesters. Two Gaza rights groups said he died after being struck “with a solid object.”
The Hamas-run Gaza Health Ministry said Shady Abdel-al was killed by Israeli fire. A spokesman said Saturday he died from head wounds, without elaborating.
The ministry removed a baby from their official death toll in May after The Associated Press reported she died from a preexisting medical condition, not from Israeli tear gas as it had claimed.

PCHR notes that Shady Abdel-al was not hit with bullets, but with a “solid object” that fractured his skull.

Hamas’ spokespeople are once again proven to be liars.

The only possibility that he was killed by Israel is if a tear gas canister hit him. (Israel drops the canisters from aircraft or lobs them over the fence.) 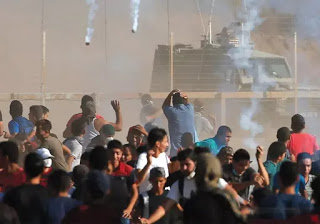 But such an object would almost have certainly hit him on the top of the head, not the side, and his injury is on the side of his head, as this screenshot from a video shows:

There was also an injury on the right side of his head, so apparently the stone that hit him had enough force to knock him down where his head hit the ground causing the other injury. 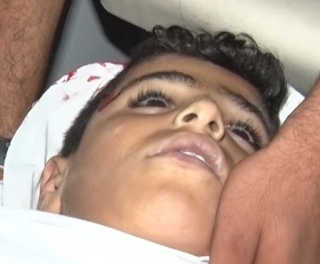 It seems highly likely that the IDF is correct and Abdel-Al was killed by a stone thrown by Gazans.

Of course, this doesn’t stop the Palestinian Ministry of Foreign Affairs to call for this to be investigated by the International Criminal Court.