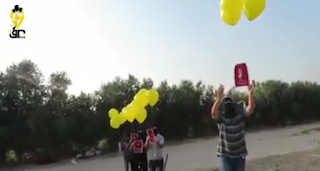 Islamic Jihad released this video showing their own masked terrorists launching balloons towards Israel and some of the fires they claim to have started.

Members of the “Baraq Unit” attached photos of their favorite terrorists – including Hezbollah leader Hassan Nasrallah – to balloons along with the burning materials meant to start fires in Israel.

Despite rumors of an agreement to stop these attacks, they continue and thousands of acres in Israel have burned.

Some 32,000 dunams (7,900 acres) of Israeli fields, parks and other lands have been reduced to ash.
The report found that 12,086 dunams (2,987 acres) of national parks and nature reserves, 9,873 dunams (2,440 acres) of JNF-owned land, 4,237 dunams (1,047 acres) of agricultural fields and 6,085 dunams (1,504 acres) of open land have been burned. Since the arson terrorism began, 14% of all nature reserves in the region bordering the Gaza Strip have been lost to fire.
The worst-hit areas are the Be’eri Crater Nature Reserve, 78% of which has been burned, and the Kurkar Niram Nature Reserve, 77% of which has been burned. Fifty percent of the Karmiya Nature Reserve, 30% of the Reches Gvaram Reserve, 27% of Nahal Grar Park, and 21% of the Besor Nature Reserve have also been lost to the fires.