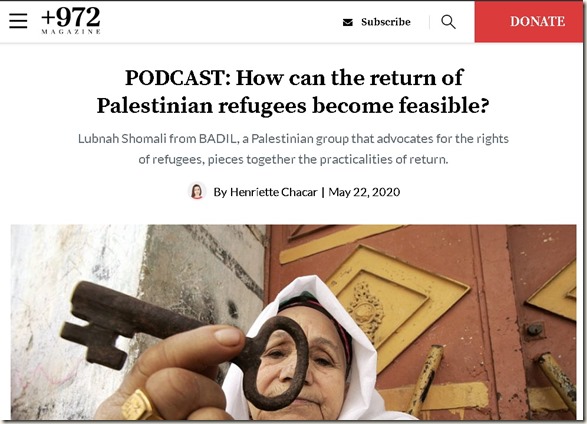 While the idea of “return” is presented as a humanitarian issue by Palestinians and NGOs, the Arab world has long recognized that it was a pretext for destroying Israel – and this remains true today.

Here are some historic quotes on the topic from research I did a number of years ago:

As early as October, 1949, Egypt’s foreign minister Muhammad Salah al-Din said, “…in demanding the return of the Palestinian refugees, the Arabs mean their return as masters, not slaves; or to put it quite clearly – the intention is the extermination of Israel.” [i]

Similarly, in 1960 Egypt’s Nasser said, “If the refugees return to Israel, Israel will cease to exist.” [ii]

In 1950, Lebanese weekly As Sayyad suggested that Arab states should recognize Israel in order to ensure the return of the refugees. That way, it added, “we should create a large Arab majority that would serve as the most effective means of reviving the Arab character of Palestine while forming a fifth column for the day of revenge and reckoning.” [iii]

In 1952, Sir Alexander Galloway, former head of UNRWA in Jordan, was quoted by Reverend Karl Baehr, Executive Secretary of the American Christian Palestine Committee, in front of a US Senate committee, as saying, “It is perfectly clear than the Arab nations do not want to solve the Arab refugee problem. They want to keep it as an open sore, as an affront against the United Nations, and as a weapon against Israel….Arab leaders don’t give a damn whether the refugees live or die.”[iv]

Prime Minister of Lebanon Abdullah el-Yafi, stated in 1966, “The day on which the Arabs’ hope for the return of the refugees to Palestine is realized will be the day of Israel’s extermination.”[v]

The people who claim they care about “return” have an agenda which is the opposite of humanitarian. It is an agenda to destroy.