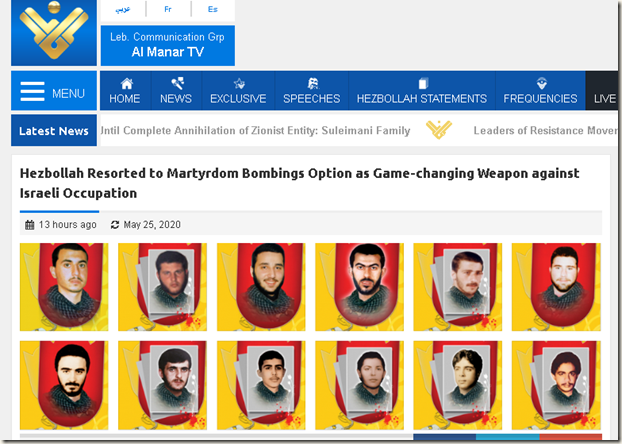 Just in case you weren’t already thoroughly convinced that Hezbollah is a completely immoral and contemptible terror group, their English-language Al Manar has an article extolling the acts of 12 suicide bombers who attacked Israeli targets in Lebanon before 2000.

Hezbollah, who has been mistakenly viewed by the Israeli enemy and the West as a mere armed group, is an Islamic Jihadi party that refers to Islam teachings and values in devising its strategies and plans.

Sacrificing one’s soul for the sake of God, nation and oppressed people is praised in Islam as martyrdom. Hezbollah sacrificed 1281 martyrs in its fight to liberate the Lebanese South and Western Bekaa from the Israeli occupation.

The military confrontation with the Zionist enemy imposed on Hezbollah Resistance certain military strategies that prevent the Israelis from frustrating them. In this context, Hezbollah carried out 12 martyrdom bombing operations against the Israeli occupation posts, inflicting game-changing losses upon.

After describing these attacks, the article concludes:

The above-detailed martyrdom bombing operations, which reflect the sublime values of sacrifice and altruism, have dug deeply in the Israeli collective unconsciousness, changing all the Zionist false claims of possessing an invincible military power.

The EU still does not designate Hezbollah as a terror group, only its “military wing.” This would be considered unbelievable if we hadn’t already seen how easily Arab terrorists can bend Europeans to their will. by making various threats of how Europe acting morally would hurt Lebanon or other such nonsense.

A group that glorifies suicide bombers as “altrusitic” does not deserve any respect, and all the respect given to Hezbollah by the EU makes the EU that much more irrelevant.