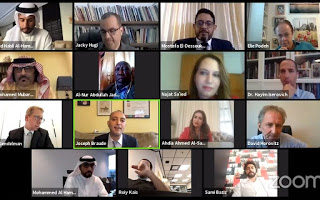 Times of Israel reports on a videoconference call bringing together Israeli and Arab journalists and academics to discuss how the media could help bring peace.

The organizer of the conference was the Arab Council for Regional Integration, which launched last year. Its website says:

The Council seeks to advance a culture of coexistence and integration among all the region’s races and ethnicities, colors and creeds, religions and sects.
The Middle East and North Africa have been plagued by a legacy of exclusion and rejection of the Other that has spread beyond it through organizations inciting boycotts in economic, cultural, social, artistic, athletic ad other civil series — part of a larger campaign to sow division, schism, hatred, extremism, and exclusion of the Other, particularly Jews and Israelis.
This destructive legacy must be overcome by growing coexistence and cooperation in order to ensure a better future for present and future generations.

This is sort of amazing.
The organization launched last year with a conference in London:

One of the council’s main organizers, Mustafa el-Dessouki, the Egyptian managing editor of an influential Saudi-funded newsmagazine, Majalla, said that as he has wandered the region in recent years he has met many like-minded Arabs “who had kind of been waiting for somebody like me to come along.”
Arab news media and entertainment have long been “programming people toward this hostility” toward Israel and Jews, he said, while political leaders were “intimidating and scaring people into manifesting it.” But many Arabs — even, to his surprise, in Lebanon, a bitter Israeli enemy — “actually want to connect with Israelis,” he added.

The Palestinian response to that conference was predictable:

Husam Zomlot, who leads the Palestinian mission to the United Kingdom and did the same in Washington until the Trump administration closed that office, belittled the new council’s members as an “extreme fringe of isolated individuals.” From Tunisia, whose new president has called it treasonous to engage with Israel, he said, to Lebanon, where protesters are waving the Palestinian flag alongside their own, “the sentiment of the vast majority of the Arab world is going in the other direction.”

They keep telling each other that.