The Nazi Holocaust was not just a European story – it was an Arab story in which the Palestinian Mufti Haj Amin al-Husseini played a central role. Mordechai Kedar explains in The Algemeiner: 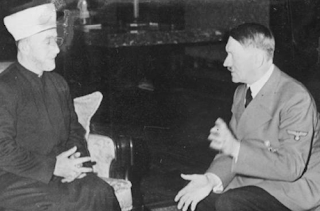 The Mufti meeting Hitler in November 1941

The mufti didn’t hide his intentions. He wrote and broadcast — mainly in Arabic via radio from Berlin — his commitment to preventing European Jews from immigrating to Palestine at all costs. Their extermination, in his view, was necessary and crucial. In July of 1945, the “Yugoslavian Commission for Determining the Crimes of Occupiers and their Collaborators” adopted Resolution 1892, which included Amin al-Husseini on the list of war criminals for his role in the forced enlistment of the populace in territories under occupation, based on clause 23 of the Hague Conventions of 1899 and 1907.

The commission noted: “As a result of [al-Husseini’s] actions … the Muslim division of the SS was established … everywhere they were deployed these units committed numerous war crimes, such as mass slaughter, despicable atrocities, burned entire communities to the ground and plundered. Because of this activity … the Grand Mufti Haj Amin al-Husseini has been added to the list of international war criminals … he bears responsibility for the induction of the Muslim masses, in other words for compelling these people, who were forced to enlist to fascist military organizations, and accordingly, he is also guilty of the same crimes.”

After the war the mufti fled to France, where the French heartily welcomed him and gifted him a villa to live in for a year.

However, beyond the mufti’s role, we must note in this context the concentration camps in Libya, which was under Italian control during the war. The Jews of Libya were sent to camps in the desert: Jadu, Sidi Azaz, Gharyan, Buq Buq, Ifrane. They were held in squalid conditions and suffered from hunger and thirst. Hundreds perished. Who hunted these Jews? Who identified them for the Germans? The answer is clear: their Muslim neighbors (There was also some friendly interaction between local Arabs and the Jewish prisoners -ed) .

Finally, we must also remember the “Farhud” of Baghdad, a pogrom of murder, rape, and plunder perpetrated by Iraqi Arabs against the Jews of Baghdad over the Shavuot holiday in 1941. In total, 179 Jews were murdered, thousands were wounded, women were raped and children orphaned due to the demonic incitement spewed by al-Husseini, who was in Baghdad at the time.