It was to counter a book, State of Terror by Thomas Suarez, a collection of distortions and calumnies aiming to blame Zionism for antisemitism, that two UK researchers, David Collier and Jonathan Hoffman, have produced a 22-000 word report called ‘Hate and Errors’. They spent weeks at the National Archives at Kew checking original sources. Chapter 9 deals with Suarez’s lies about the exodus of the Jews of Iraq. Point of No Return reproduces the relevant extract: 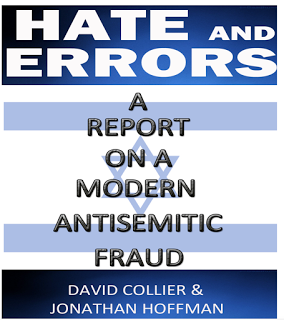 Suarez’s description of the flight of Jews from Iraq (page 282) is downright dishonest, there is no other word for it[1]: ‘Until its ethnic cleansing of 300,000 more Palestinians in 1967, Israel’s most precipitous post-1948 ethnic cleansing was of Jews from North Africa and the Middle East’

Thus victim is turned into perpetrator!

He writes that Israel destroyed the Iraqi Jewish community and blocked other countries from helping Jews who wanted to leave Iraq. And he says that the anti-Jewish violence in Iraq was a ‘false flag’ operation.  This is a pure fabrication.[2]Iraq destroyed the Iraqi Jewish Community. It began with the Farhud in 1941. The Farhud was the Holocaust-era massacre by Arab nationalists in coordination with the Nazis, which occurred on June 1-2, 1941 in Baghdad, killing hundreds of innocent Jews and brutalising thousands more, and pillaging their property.  The Farhud was a major step in the process which resulted in the forced exodus of 850,000 to 900,000 Jewish refugees from centuries of peaceful existence in Arab countries.Two Arabs have gone on record to explain the Farhud[3](Saudi journalist Turki al-Dakhil and Iraqi scholar Rashid al-Khayoun, 1 February 2014).
The Jewish Senator Ezra Menahem Daniel [4]appealed after the Farhud against the discriminatory practices introduced in 1948-9. Jews could not work, attend university or travel. Jews were arrested on the slightest pretext. Money was extorted from them to pay for war in Palestine. In March 1950, Jews were given permission to able to leave but were stripped of their nationality.  In 1951 the property of departing Jews was frozen by law.

When Suarez does mention the Farhud, he goes to extreme lengths not to report it as an act of antisemitic violence. In fact, he absurdly implies it was the British, adducing a 12-year-old (at the time) anti-Zionist Jew (Naeim Giladi) in his support (page 71). This type of rewriting of history highlights how desperate Suarez is to create a one-sided fictional tale that condemns the Jewish Zionists at every juncture and absolves everyone else of everything, including violent massacres of Jews.
Another example of distortion comes at the bottom of page 28, where Suarez suggests that Hanna Braun was ‘a Hagana member, involved with bringing them (Iraqi Jews) to Israel.’